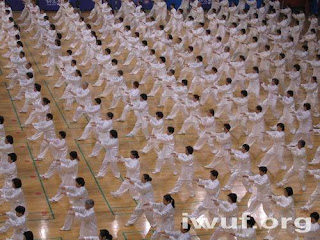 Congrats to our kailiyans Jennifer Lagilag and Benjie Rivera for bagging medals during the 9th International Wushu Championships in China. Lagilag won a silver medal while Rivera got a bronze.

From the Manila Standard:

The two silvers were provided by Jennifer Lagilag and Mary Jane Estimar, who both competed in the women’s sanshou 48 kilograms and 52 kg, respectively, while the bronze medals were courtesy of Marian Mariano (60 kg), also in women’s sanshou and Benjie Rivera (56 kg) in men’s sanshou.

A native of Baguio City, Lagilag advanced to the final by overwhelming Naw Mar Htun of Myanmar in the semis, but lost to Vietnamese Nguyen Thi Bich in the showdown for the gold.

Estimar, who hails from Iloilo, was outclassed in the championship round by Qin LiZi of China. She won over Farzaneh Dehgani Younarti of Iran in the semis.

After winning a gold medal in the 52-kg class of the men’s sanshou in the 2005 staging of the biennial tournament in Vietnam, Rivera, also from Baguio, went up and competed in the 56-kg division, eventually settling up for the bronze as Zhang Shuai Ke of China and Nazir Jian Qin dominated the top two places.