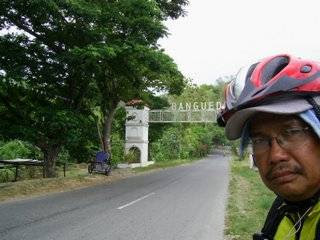 Say hi to this guy, if you see him biking around our mountains. His name is Amado Picardal, a Redemptorist priest from Davao City who is biking around the country “for life and peace”.

Shocks, Fr. Amando naman inunahan mo ako dito. Plano ko ding gawin iyan. Hehe. We should really give props to our kababayans in Mindanao for coming up with creative ways of expressing their advocacies. Remember the group of farmers from Bukidnon who walked all the way to Malacañang?

END_OF_DOCUMENT_TOKEN_TO_BE_REPLACED

From the Philippine Information Agency

A memorial peace shrine built by the Kalinga Peace Makers Movement at the Tabuk Pastoral Center (TPC) here was unveiled on March 15 with Governor Floydelia Diasen and City Mayor Camilo Lammawin Jr. leading the wreath laying at the foot of the marker.

It was dedicated to those who sacrificed their lives in the name of service for the people of Kalinga, particularly the four Catholic priests killed in recent years and those victims of violence.

The inscription at the peace shrine reads: “In memory of Rev. Fathers Conrado Aquino, Elias Bareng, Leo Vande Winkel, all CICM priests and Franciscus Madhu, SVD and all those who sacrificed their lives due to tribal or criminal violence. May the blood they shed be the seed of lasting peace in Kalinga.”
END_OF_DOCUMENT_TOKEN_TO_BE_REPLACED

The police is hunting for the suspected mastermind and his alipores according to this latest report from the Philippine Star via ABS-CBN:

BONTOC, Mt. Province – Police vowed to arrest the mastermind and three other suspects in the Christmas Day murder of the mayor of Paracelis town within the month.

Being hunted down for the killing of Mayor Ceasar Rafael are Anonat barangay chairman Rommel “Borbon” Ambatali, the suspected mastermind and alleged leader of a criminal syndicate involved in kidnappings for ransom, robberies in band, illegal possession of firearms, murders and cattle rustling in Nueva Vizcaya and Isabela; Anonat barangay kagawad Danny Agabao, and brothers Tony and Orland Gumbi.

Last week, Ambatali and his six henchmen were formally charged for the Rafael killing after two suspects – Bong Felix, 34, and Rene Yadao, 32 – gave themselves up to police and claimed that they served as lookouts.

The two tagged Ambatali as the mastermind who paid them P5,000 for the hit job.
END_OF_DOCUMENT_TOKEN_TO_BE_REPLACED Never did it enter my mind to consider a career in the military. I had this image that the life of a soldier was a hard one, not much different from a farmer’s who must endure the rain, the heat of the sun, and the cold of night out in the field. I went through my formative years dreaming of someday becoming a big shot with lots of money and power.
END_OF_DOCUMENT_TOKEN_TO_BE_REPLACED