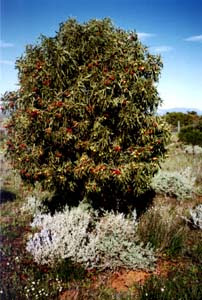 While we are on the subject of Igorots in Candon, here’s a story about the three Igorot chieftains who once ruled the village. Incidentally, Candon is named after the kandong tree which once stood in the village’s center. (I can’t find a picture of a kandong tree but the one at right is a quandong tree which may or may not belong to the same family of trees as this legendary kandong tree.)

This village, so the legend runs, was ruled by the three local chieftains: Abay-a, Madalang, and Kalinio. Madalang chose as his abode the shade of this gargantuan tree together with his only daughter, the beautiful Ineng.

“I am growing old fast, Ineng”, Madalang said to his daughter. “One day I wish to see you married before Kabunyan calls me to the great beyond. But my child, I would only want a son-in-law who could defeat me in “Gabbu” (wrestling). What do you say Ineng?” And Ineng could only answer sobbing, “I submit to your wishes, dear father”.

And so one day, after the “Kaniaw” was over, the sound of gongs, cymbals and gangza intermingled and reverberated far and wide. Subsequently, the elders issued the announcement regarding the wrestling competition. It was Abay-a who first took the challenge. At the sound of the cymbal, the protagonists fought savagely. By some freak stroke of fate, Abay-a in his unguarded moment unfortunately stumbled over a root of the Kandong tree and lost his balanace.

Madalang savagely took advantage of the situation and mercilessly sent Abay-a reeling to the ground with several broken ribs. That was the end of the bout. Three weeks passed, and this time, Kalinio who is reputed to possess the same human power took up the challenge. Just then, a crow going for its mate carelessly flew overhead as if to augur the impending disaster that would follow. Moments later, the fight began and both protagonists stood their ground and each manifested signs of being victorious.

Madalang who is reputed to be the strongest, tried his old ruse to send Kalinio off balance but was outwitted by his elusive foe. Fate didn’t destine Madalang to defeat Kalinio, so Ineng was married to the victorious Kalinio.

Just as the celebration was going on, the Spanish conquistadors, who were on their way to colonize Northern Luzon, passed by and attacked the merrymakers. Some offered futile resistance, others fled in confusion and fear and those who were taken by surprise yielded to the invading forces.

Subsequently, the friars assigned in this village ordered the cutting of the Kandong Tree and its place was planted the first cross of evangelization. The timbers taken from the tree was used in the construction of the first Roman Catholic Church in the 6th century.

Beliefs and traditions have it that when the colonizers set foot upon this place and inquired as to its name, the natives answered, “Kandong”, referring to the tree. Since that time on, the place came to be called Candon. [Source: candoncity.gov.ph]

I’m in the mood to name the bad and good characters in the story so here they are:

BAD: (1) Those Spanish friars for cutting the Kandong tree. If they were in Sagada idedemanda sila ng illegal logging ng isang tao doon, but this time may merit ang kaso. (2) Those Spanish conquistadors who attacked the merrymakers. Hey conquistadors, when someone is having a party, just join in the fun. Siguro nakainom itong mga merrymakers ng tapuey kaya sila natalo.

MAYBE GOOD OR BAD: Madalang is good for being concerned about his daughter’s future but maybe he is bad for marrying off his daughter like that. If he is alive today, I’m sure Lynn Madalang of the Ebgan Women’s Foundation would give him an earful. Aktibista pa naman si Lynn at sabi niya patriarchal daw ang mga Igorots. I don’t know if Lynn and the man in our story are related.

GOOD: Kalinio is good for winning both the wrestling bout and the hand of the beautiful woman, Ineng. [Question by Ferricardia: Why are women in legends always described as beautiful?] Kalinio, may or may not be related to the Cariño clan in Baguio who produced at least two of our Igorot Achievers (Jessica and Mateo) but whose most famous member may be Robin Padilla, the son of Eva Cariño Padilla who, according to my friend, is a close relative of Joanna Cariño of the Cordillera People’s Alliance which celebrates Cordillera Day every April to commemorate the death of Macliing Dulag, who also made it to our List.