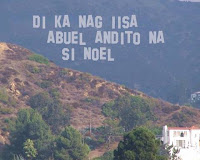 The battle cry is inspired but it only focuses on Janet and does not mention Noel, the man of the hour, so here’s my suggestion: “Hindi ka nag-iisa Abuel. Andito na si Noel.” In this case, the two have equal billing di ba?

Meanwhile, if you are interested in keeping tabs on the St. Louis University vs. UC/BCF school rivalry, the current score is UC/BCF: 2 and SLU: 0. So there’s no question as to who currently holds the bragging rights. To quote Meling (in the comments section here): “Top that, SLU?”

All that UC president Reynaldo Agranzamendez could recall of Malimban was that he was “an accountant and a very unassuming fellow.”

Malimban’s first-place finish was so unexpected that at a management meeting just before the exam results were released, Agranzamendez had told his staff to prepare for the worst.

But Saturnino Ebusca, the UC vice president for finance, realized that Malimban actually placed 14th in the licensing examination for accountants seven years ago.

UC, formerly known as the Baguio Colleges Foundation, earned its place among the country’s top law schools when another graduate, Janet Abuel, topped the 1998 bar exams.

He said Malimban had just proved their critics wrong.

Abuel, like Malimban, is an accountant. Agranzamendez said many of their law graduates have an accountancy background which may explain why UC’s graduates perform so well at the bar.

Read the rest of the story at my once favorite paper.