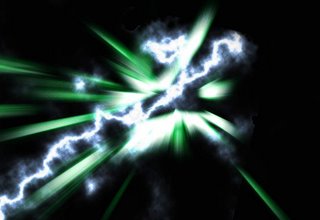 Did someone other than the forces of nature create these awesome lightnings? Yes, according to Isneg traditional belief. Read on.

Sal-it ken addug (Lightning and Thunder) Once upon a time there was a man who held the world in his hands. Once in a while, he would roll a cigar, then strike together his flint and steel, or iron and stone to produce a spark for his cigar. This spark is the bright, zigzagging streak of fire seen in the sky. When this fire alights on the people, it eats their brains, and when it alights on trees, it eats the weevils. Now the thunder, it is said, is the water that roars in the sky. It is actually found in the lowest part of the sky, among those huge knobbed stones known as clouds. When it rains, the water in the sky increases, and the big stones begin to roll. And that is the loud noise we hear.

The next story is more about normal folks like us rather than supernatural ones.

Once there was a man who had a cow. One evening, he untied the cow and brought her to graze on the kappay grass. The place was far from his house. Early the next morning, he went to see his cow, only to find her dead. On closer look, he saw a dead and squashed fly on the body of his cow. He reported the matter to the judge who ruled that henceforth flies could be killed anytime, anywhere. One day, the man went for a walk, passing by the house of the judge, who happened to be sitting on a bench in front of his house. On the forehead of the judge was a fly. He was mad at the sight of that fly, because it reminded him of his dead cow. Whereupon he looked around for a piece of kindling wood, and finding one, jumped in front of the judge and clubbed the fly. The fly died but the judge’s head was severely injured. An investigation was made but because the judge had said no person could be imprisoned if he/she killed a fly, the man was not imprisoned.

These tales were brought to you courtesy of Arlene Sapanza from this site. Photos courtesy of ozone.com and kepplah.com