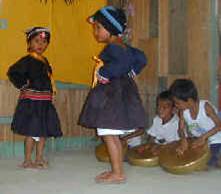 This photo of Isneg children learning to dance (courtesy of seasite) is a timely reminder that our traditions will not die when passed on to the next generation. It also encouraged me to continue posting Cordillera folktales so our kids will learn about the stories of our people. From our first installment on the origin of the peace pact (which you can read here), let’s move on to two Isneg folktales. Since the Cordilleras is renowned for its rice terraces, it is fitting that these tales are about rice.

Folktale #1. Once upon a time, food was plentiful. Also, people were kind, gentle, and not given to war. Then, rice grains were so big that one was enough to feed a person. Rice grew abundantly everywhere, and didn’t have to be sown in the ground. It appeared and rolled around in innumerable quantity. A woman and her daughter began worrying. People had built their granaries small, and there were not enough to contain the never-ending rice. So the two began building a bigger granary. While doing so, rice grains kept rolling in. The woman got mad, and she struck one of them. “Why do you come when you’re not wanted? Can’t you wait till the new granary is ready?” The grain shattered into a thousand tiny pieces. “All right,” the pieces said, “We’ll never come again. We’ll stay on stalks until you want us.” 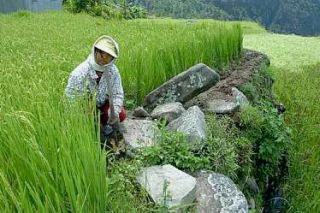 So what lesson do we draw from this tale? That anger and shortsightedness don’t pay. If the woman wasn’t pissed off with her blessings, we wouldn’t be doing the back breaking work of planting and harvesting rice. But let’s not blame her entirely shall we? After all, our ancestors wouldn’t have bothered to build the rice terraces that our region is famous for if free grains of rice (big ones at that) just appeared from the ground. 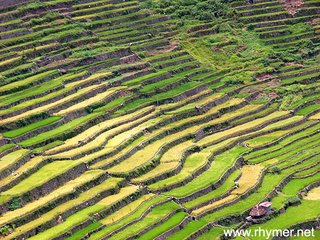 Folktale #2: Long, long ago, a man had no grains and he went hungry. Birds came and offered to give him seeds of rice and corn from a certain rock in a faraway place. The man was supposed to plant these, then share the harvest with the birds. He agreed, whereupon the birds fetched the seeds. The man planted the seeds, but reneged on his promise to share the harvest. Since that perfidy, ricebirds have been attacking the rice plant and crows have been damaging the corn, as a punishment for the man who broke his promise.

Note: The two folktales are lifted from Arlene Sapanza’s article which you can find in this site.