One of our commenters, I think it is Betelnut, rightly noted that our history books reflect very little (or nothing at all) about the Igorot’s role in our history as a nation. Her comment encouraged me to make this post about two Igorots (one is an iFontok and another is an Ifugao) who played key roles in the EDSA People Power “revolution”. I know this post should have been made in time for last week’s EDSA Uno anniversary but I had to make an emergency trip to the boondocks so I didn’t have the time to do it. At any rate, it’s better late than never. And things like this are timeless, no?

So who are these people who somehow earned their right to be in our history books? One is Catholic Bishop Francisco Claver (who made it to our list of achievers here) and the other is Brig. Gen. Felix Brawner Jr. (who will make it to our List of Achievers in a future installment, aba he graduated Number One in his class, Philippine Military Academy Class ’57). The Bishop is known for being a Marcos critic while the General is a “Marcos General” but who eventually placed his more important duty to the nation over and above his personal loyalties. 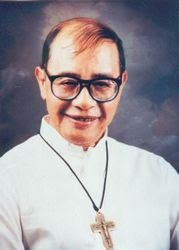 Bishop Claver, as we noted here, is one of the progressive voices in the Catholic Church. In an article on Jaime Cardinal Sin, we find an interesting reference to Bishop Claver’s progressiveness which, I’m pretty sure, didn’t endear him to the powers-that-be within and outside his church. Quote: “Political analyst Alex Magno says that part of Sin’s appeal to the Vatican at that time was his being ‘one of the boys,’ in contrast to the activist stance assumed by Bishops Antonio Fortich and Francisco Claver at the start of martial law.” Emphasis supplied. [Source: Newsbreak via cardinalrating.com]

In other words, while some church leaders were still dancing with the dictator, Bishop Claver was criticizing the Marcos regime for its many abuses. But instead of mouthing off his criticisms and then simply sitting down, the Bishop is also a leading advocate of active non-violence as a strategy for effecting change. [Read an article about him and non violent social action here and an article he wrote about active non-violence here.]

His commitment to active non-violence helped shape the Catholic Church’s response to Marcos’ electoral fraud and its call for peaceful strategies to challenge the dictator. A quote from the Institute of Church and Social Issues (ICSI): “During the 1986 snap election, ICSI played a significant role in orienting the Philippine Bishops. Bishop Francisco Claver, SJ, one of ICSI’s founding directors, drafted the Bishop’s “Post-Election Statement” which denounced the election as “unparalleled in fraudulence” and called on the people to peacefully compel the government to undo the wrong it had done – something which was accomplished in the popular revolt which drove Pres. Marcos from power.”

You can read a copy of the Post-Election Statement here. It is a good read and a very good example of the Church speaking with a prophetic voice. One hopes that the Church at present would be just as prophetic given that the incumbent in Malacañang committed practically the same sin of subverting the people’s will but the Church has become wimpy and vacillating these days.

Meanwhile, General Brawner as we stated above is close to Marcos. However, he somehow found it in his heart to not be blinded by his loyalty to the former President when blind obedience would result in bloodshed and violence. A story by retired Col. Romeo Lim (via the Oarhouse blog) tells us how General Brawner made a turnaround. Colonel Lim was the Chief of Staff of General Brawner and in this story he portrays his boss — then the Chief of Operations of the Armed Forces of the Philippines (AFP) as well as the Commander of the First Scout Ranger Regiment (FSRR) — as a rational man.

Lim writes: “The group of Enrile and Ramos feared the Scout Rangers the most because it was an elite military unit under the command of Brig. General Brawner who was known to be very loyal to President Marcos and was a trusted ally of then AFP Chief of Staff Fabian Ver.” As it turned out, our kailian eventually withdrew his support for the dictator. Colonel Lim gives some details on how this happened:

“When the general arrived, I took him aside. I suggested to him that in view of everything that was happening, it would be better if he instructed the troops to “freeze”, that is, not to move in favor of any side. He looked at me and in an indignant tone told me that “freezing” the troops would be an act of cowardice. With that, I requested him to pass by his room where he saw his wife, relatives, and Col. Matabalao. Except for the colonel, everyone started crying. All of them asked him to defect. Meanwhile, I gathered all the officers and told them that if Brig. General Brawner asks who was still willing to fight for President Marcos then no one should raise their hand. Sure enough, the general called for a command conference and asked the question.

No one raised their hands.

Visibly surprised at the outcome of the conference, the general returned to his room. It was already late afternoon of Monday, the 24th of February. He then told his wife, children, close relatives and Col. Matabalao that he was no longer going back to Malacanang.” Read the whole story here.

So yes, Virginia, Igorots are also a part of Philippine history. And they ain’t just in the periphery but are active actors too.

6 thoughts on “Igorots During Edsa Uno”