Igorot Beggars: The Skeletons in Our Open Closet 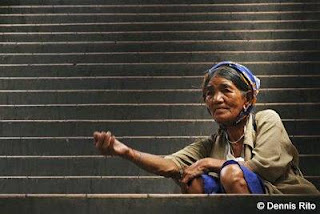 Even though this blog mostly focuses on our achievements, it is also not blind to our failings as a people. I’m sure you will agree that probably the most visible sign that we have failed somewhere is the presence of Igorot elderly beggars in Manila.

As a Manila-based Igorot blogger, I’ve long wanted to do a post on this issue but kept putting it off mainly because I wanted to really compose my thoughts on the matter. However, after receiving an email from Dennis Rito (you should visit his blog here) about an Igorot beggar, I decided to just go ahead with this post. Maybe it is better if we collectively think about this problem.

I am writing a caption for my photoblog concerning the photo I took of an Igorot beggar recently. I want to give justice to the photo and wish to ask what prompted elderly Igorots to beg in the city? Is this a usual occurrence in Baguio City and in their villages as well? What is the view of their fellow Igorots regarding this phenomenon (mendicancy)?

And this is how I replied (inedit ko ulit hehe):

Good questions. These are questions that we Igorots are asking ourselves. I’m not quite sure whether we found the answer as to why elderly Igorots are begging in Manila. Truth be told, hindi naman talaga sila naghihirap (compared to the Tagalog beggars) so I don’t know why they are doing it. And no, begging is not something that they do in their own villages back home but some are also begging in Baguio.

The view of their fellow Igorots? I can’t say categorically. Some are angry at these beggars for creating a bad image for Igorots. Some would just shrug it off. I’m not quite sure if any Igorot would be sympathetic to the beggars. Okay siguro if they really had to beg dahil walang-wala sila. Pero hindi naman sila walang-wala.

How should we deal with this matter? Ignore it? Conduct a shame campaign, i.e., shout at them with our nostrils flaring, “Omibabain ka nga, agawid ka ketdin!”? Round up the mendicants and send them home? Jail them? Baby them? Appeal to their conscience?

What is the cost of this phenomenon to the collective Igorot psyche? Can we afford to ignore this problem? [As Michael Tan noted here, the Igorot stereotype is changing from the fierce warrior to the urban beggar.]

Who should lead in looking for a solution? The local governments? The church? Us? The beggars’ families? Gloria Arroyo? [Maybe Pagano can do a psychoanalysis of the Igorot beggar in the same way that he psychoanalyzed Gloria?]

Many questions, ano. I’m sure you have bright ideas which you’d like to share para mahanap natin ang mga sagot. Incidentally, most of the beggars come from my hometown (Sagada) so this issue really hits home. [Nope, no one from my own home, i..e, family/clan, is in this begging business.]

36 responses to “Igorot Beggars: The Skeletons in Our Open Closet”