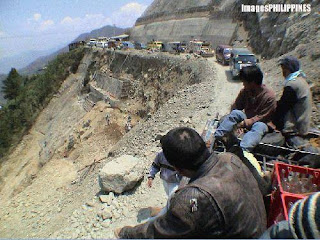 From the Northern Philippine Times Blog
BY GINA DIZON

BONTOC, Mountain Province — While the much touted improvement of the Halsema Highway has already been heavily promoted to bring development to this fifth class province, it remains to be seen reportedly due to non-delivery of credible work and expiration of contracts by the Dept. of Public Works and Highways and winning contractor-bidders.

These road rehabilitation projects refer to the priority projects of president Gloria Macapagal Arroyo which are part of the second phase of the Halsema Highway and the Bontoc-Tabuk-Tuguegarao Road.

The Mt. Data-Bontoc road spans a length of 50.5 kilometers with an estimated project cost of one billion pesos and the 39 km Bontoc-Banaue road with P780 million project cost.

In a letter to secretary Cerge Remunde, director general of the presidential management staff of the office of the president, private contractor Juniper Dominguez , cited expired and nearly to expire projects which have reportedly not yet commenced work despite the alleged collection of the 15 percent mobilization funds by contractors of individual projects.

The amount of 340 million was released to commence work for the Mt Data-Bontoc route.

He said road contracts along the Bontoc-Lubugan-Tabuk road which are nearly to expire of their contracts with no work initiated yet include the P13.4 million contract by RS Sepian construction and the P12 million road work by RIM Construction.

Earlier accounts said the amount of 229 million was already released for the Lubuagan Tabuk section with a 988 million appropriation.

Expired contract works without work commenced may mean termination of the project or revocation of the contractor’s license to operate.

“Mobilization funds released, require that the project has already a billboard identifying the work project, equipments on site, and work already commended yet these indications are not visible in these road projects,” Dominguez said

Meantime, multimillion worth of projects with alleged negative slippages, subcontracting and substandard works and materials have already commenced along the Baguio- Bontoc road.

At least P189 million was already released for the Bontoc- Banaue section.