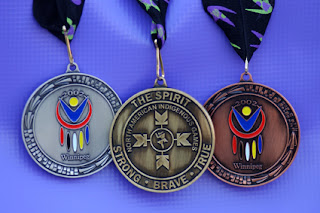 Since we can’t give medals like the ones pictured above (courtesy of the North American Indigenous Games) to our fellow Igorots who topped professional board exams, the next best thing is to include them in our List of Achievers. Those listed here are taken from the website of the University of the Cordilleras/Baguio Colleges Foundation (UC-BCF) and from news reports released by the Professional Regulations Commission for board exams conducted in 2006. Unless the school is indicated, the topnotcher is from UC-BCF.

As explained in our first post on Igorot topnotchers, the people listed here were picked for inclusion mainly because they have Igorot/Igorot-sounding surnames. Hence, we may have missed those who have non-traditional Igorot surnames and we may also have included people who are actually non-Igorots. In other words, in terms of Igorotness, we cannot vouch that this is 100% accurate he he.

At any rate, we congratulate those who made it to our List!