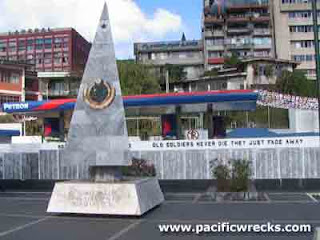 THE WAR MEMORIAL IN BAGUIO. WE HOPE IT ALSO
HAS THE NAMES OF IGOROT WOMEN-GUERRILLAS.

Igorot men were not the only ones who made a mark during the Second World War. The women also played an important role as ration/ammunition carriers and, according to a Time Magazine report in May 1945, were braver or more fearless than the men (at least in the particular incident reported).

I’m not sure if the role of these women were given proper recognition by authorities. I remember looking at Baguio’s War Memorial, which insribes the names of those who fought during World War II, but I don’t remember coming across a woman’s name. I will have to double check to make sure though. It would be a shame and an injustice if the women are not equally recognized for their role in the war. This is the Time report:

Time article by William P. Gray: The mountain war for Baguio may be remembered best in time to come as the war of the Igorot women. Scores of these sturdy, brown, barefoot descendants of headhunters have padded softly out of Baguio and down through the protecting jungles into the U.S. lines. Now they are climbing back, carrying rations, water and ammunition for the 33rd Division, helping to solve a tough problem in mountain logistics.

Each morning the Igorot women line up beside the road, standing or squatting like bright salt shakers on a shelf, awaiting their orders for the day. They are modestly clothed, many in American house dresses, though their men frequently wear only loose-tailed shirts and red G-strings.

The women go where the bulldozers have not gone and the trucks cannot go. They carry their burdens on their backs, holding them with thin, woven bamboo head straps. Each woman takes up to 50 pounds, one-fourth the load saddled on pack horses on the same trails. But there are six times as many Igorot women available as pack horses.

First Forty. It was the women’s own decision to go to war. There was a shortage of men carriers and 40 women volunteered. The Army paid them 1.50 pesos a day. The first day they made three times as many trips as the men. At least one battalion of the 33rd Division lived and fought last week on supplies, carried up by the Igorot women. When Japs fired on the trails the men dropped their loads and scattered; the women, undisturbed, plodded on in a long single file to the front.

There are pretty young girls and a few pregnant matrons among them. There is also Aning Andao, a wizened old lady in a brocaded black head cover, grey striped shirt and patched quilted skirt, wearing an athlete’s gold medal around her neck. She has the milky rings of old age around her irises and old cigar stains on her teeth, but she can climb and carry with the best of them.

Go Aning Andao! Even though you were likened to a “bright salt-shaker in a shelf”. A very odd description. What’s up with that William Gray?

One thought on “It Was Also a Women’s War”