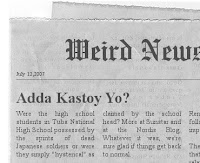 WEIRD. Was Cordillera Tourism Director Purificacion Molintas misquoted in this news report or is she simply clueless? You can read the report here, but here’s the questionable quote:

Our main focus at the moment will be the Ifugao rice terraces areas and the Sagada Caves in Mountain Province where the centuries-old mummies are kept, she said.

We’d like to believe that she was misquoted because otherwise she has no business leading our region’s tourism effort. In case you don’t know yet, there are no mummies in Sagada’s caves. The mummies are found in Kabayan.

ALSO WEIRD. Were the high school students in Tuba National High School possessed by the spirits of dead Japanese soldiers or were they simply “hysterical” as claimed by the school head? More at Sunstar and at the Nordis Blog. Whatever it was, we’re sure glad if things get back to normal.

KIND OF WEIRD. We like the fact that the Baguio City Council passed an ordinance which requires the use of paper bags (rather than plastic) by business establishments but we’re wondering why it will only be fully implemented in 2012. We Filipinos are notorious for having a short memory and it’s quite possible that when 2012 comes around, no one will remember this ordinance. So it might go the way of those good laws that are never really implemented. More here.

PAREHONG WEIRD. We don’t know which is weirder: the fact that pre-arranged marriages still exist or the fact that a local legislative body is trying to legislate a personal/family matter. More at Northern Times.

WEIRD PA RIN. We never realized that Baguio, the City of Pines, has a concrete pine tree which was constructed to the tune of P2 million. More from Alfred Dizon.

NOT REALLY WEIRD. Apparently, Levi’s jeans (the original version) are now being made in Loakan. But for a fraction of the price, you can buy a similar pair of jeans made of the same material that Levi’s uses and tailored by former Levi’s workers. Saan ka pa? More at Sunstar.