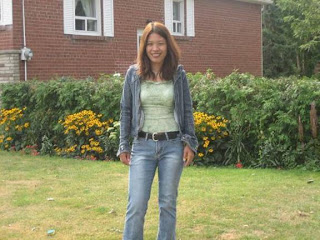 Here’s our continuing coverage of the tragedy that befell our kailiyan, Jocelyn Dulnuan, in Toronto. Jocelyn has a Friendster account here. You might want to leave messages of sympathy to her family in said site.

*****
UPDATE 3:
London Free Press: The mansion where she was found murdered was targeted for a burglary, but police won’t say what the looters were looking for in the house. More here.

newswire.ca: The YWCA-Toronto urges political candidates to address the issue of violence against women. Excerpt from the YWCA statement: The brutal murders of Jocelyn Dulnuan and Aysuen Sesen serve to remind all Ontarians that the root causes of violence against women deserve the same media and political attention given to other aspects of the provincial election campaign. YWCA Toronto urges provincial candidates to hear this message and begin to address in their platforms the conditions that trap women and children in violent homes. More here.

“There’s a second door in the back of the house that leads to the basement where her room is. She told me the last time I saw her that there’s a river behind the house, so someone could just pass onto the (property) there, around the gates,” said Lyn, 27, who is also a housekeeper. Lyn, who did not want her last name published, said she spoke with Dulnuan the morning she was killed.

“She came here like everybody else; to make a living and help her family,” said Fay Hangdaan, who lives in Toronto and is the cousin of Dulnuan’s fiancé. “We just can’t believe it.”

“Her family is longing for her body to be brought home, but unfortunately, the Philippine consulate cannot fund the shipment,” wrote Imie Belanger in an email last night. Belanger was a neighbour of Dulnuan’s in the Philippines.

The Toronto Star also reports that Jocelyn is a criminology graduate from the University of Baguio.

***
UPDATE 2: A report by Vincent Cabreza of the Inquirer: The Overseas Workers Welfare Office has asked the Philippine embassy in Canada to check on Internet reports alleging “foul play” in the death of a 27-year-old Filipina from Hingyon, Ifugao, who worked as a maid in Mississauga City.

Anthony Basil, Cordillera case officer of the Overseas Workers Welfare Office here, said they asked the embassy officials to look into the mysterious death of a certain Jocelyn, said to be a resident of the village of Namulditan in Hingyon. More here.

Thanks to Vincent for bringing this to the attention of the OWWA.

Updates from Toronto:
From 680 News: Peel Regional Police suspect robbery was the motive in the death of a housekeeper at an opulent estate in Mississauga. Investigators told reporters Wednesday that the house was targeted and the victim may have been as well.

Jocelyn Dulnuan came to Canada from the Philippines on a work permit last year. She had worked as a housekeeper for the family that owns the mansion at 2450 Doulton Place for two months. Prior to that, she had several nanny jobs across the GTA. Her mother lives in Hong Kong and was told of her death over the telephone Tuesday. More here.

You can read similar reports at CBC News and CTV.ca.

City News has a video report here and a must read article that starts: It sounds like something out of an Agatha Christie mystery novel – a maid from across the world comes to a huge mansion and goes to work for a wealthy family, only to wind up murdered inside the spacious multi-million dollar home.

More from citynews: Cops received a phone call from someone in the residence around 5pm Monday, after her body was discovered inside. Detectives have since built a wall of silence around the case, saying as little as possible, beyond assuring residents a killer isn’t prowling their neighbourhood.

“This was an isolated incident, and the location was targeted for a specific reason that I’m not prepared to comment on today,” Peel Inspector Norm English answers carefully. “I do believe, though, that there was property taken from the residence. However, this needs to be determined after doing a proper walk-through with the homeowners.” Read the whole story here.

10 thoughts on “A Toronto Tragedy, II”