Here are some interesting links that you might want to read:

► If you were Takit Bersamin, what would you do first and why? Abrenian.com asks its members and readers to give some unsolicited advice to Abra’s Governor-elect. Join them here.

► Do you remember the video of Luke-Abeya Torrevillas which we uploaded here? Apparently said video is now in competition at lonelyplanet.tv. You might want to rate and vote for the video here. Voting ends May 23, so you better hurry up, my friends.

► After Batad sa Paang Palay, here comes another film about Ifugaos entitled Haw-ang (English Title: Before Harvest) produced by an independent outfit. We are, of course, looking forward to watching the movie but it seems like it belongs to that tired genre of movies about poor local villagers who have “slow spirits” and who live “little lives” and whose lives will improve only because of the help of an outsider. [Quoted words are from this article which appears to be a press release for the movie.] We never believed in those kinds of films, they may be well-meaning but they are patronizing and condescending. In fairness, we still have to watch the movie so we are keeping our mouths shut for the moment. 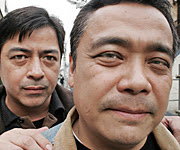 ► Speaking of films about the Cordilleras, Louis Templado has a review of the film Abong/Small House which, according to him, is now being screened in different schools and churches in Benguet. Interesting quote from the article: “Some viewers–the very people whose way of life the film celebrates–paid their entrance fee with rice, sweet potatoes and fruits.” Sweet potatoes for entrance fees? I’m not sure whether this is a fact or Templado’s attempt to be cute. [Photo credit: Louis Templado]

► The coin toss heard around the world? Wow, looks like the news about our good friend Mary Umaming’s act of tossing a coin to decide who will sit in the Bontoc municipal council was picked up by media outlets around the world: the UK/BBC (Thanks Nashman); Middle East/Gulf Times; Taiwan/Taiwan News Online; North Carolina/StarnewsOnline; Vietnam/HanoiMoi; Germany/N24; Republic of Georgia/Contra; Switzerland/Tagblatt at marami pang iba. It’s refreshing to have a widely reported election news from our region that has nothing to do with violence, isn’t it? 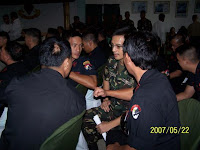 ► Are you wondering how alleged mutineers Ruben Guinolbay and Dante Langkit (who ran for Congressman of Kalinga in the recently concluded elections) are doing these days? Ellen Tordesillas has a photo of our two kailiyans which we are stealing from her site and uploading here (above, click photo to enlarge). UPDATE: Oops, it was actually Danzel Langkit, Dante’s twin brother who ran for Congressman. Please note Ellen’s post in the comments section below.

And here’s another update from her: “Throughout this ordeal that they are going through, Capt. Guinolbay and Capt. Langkit have shown themselves to be men of courage, principle and integrity. Each one of them is truly an officer and a gentleman. Capt. Langkit has gained a little weight now that he has been taken out of solitary confinement. As Danzel described it, ‘Naa-arawan na siya’.” Thanks Ellen. [Photo credit: Ellen Tordesillas]

► The venerable Baguio Midland Courier is now online. But whoever is managing the website is treating it as if it is a weekly paper. In other words, you have to wait at the end of the week to read any news of events happening in the Cordilleras. Thank God for Sunstar Baguio which is doing a good job of publishing daily news. Sandati is not impressed with how the website looks either.

► Want to read blogs that touch on life in the Cordilleras from an outsider’s perspective? Here are some links to blogs of U.S. Peace Corps volunteers writing about their life and work in the boondocks: Living the Dream (Kapangan, Benguet); Good Times in the Philippines (Bontoc, Mt. Province); Eva Peace Corps (Lamut, Ifugao); Freelance Life Specialist (Mayaoyao, Ifugao); and Jody’s Peace Corps Experience (La-Trinidad, Benguet).

► Congratulations to Bugan of Mountain Breeze who is going to Cardiff, Wales on a Ford Foundation scholarship. Yay! Visit her blog here. And make sure you read her article about Marlene Paredes, a kailiyan from Sabangan who works as a marketing strategist with the Texas Instruments in Dallas.

15 thoughts on “Roundup: News From the Boondocks”