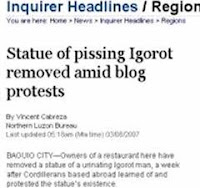 If you blog, maybe there’s no such thing as saying one’s piece for the last time. If you remember, we stated earlier that we believe we said the last things we were going to say about the peeing statue. It turns out we have more things to say but it’s only because we want to clarify the news report published last March 8 in the Philippine Daily Inquirer.

For those of you who do not read the Inquirer, here’s the story written by Vincent Cabreza. He quotes Bugan and this blog towards the end of the article.

BAGUIO CITY—Owners of a restaurant here have removed a statue of a urinating Igorot man, a week after Cordillerans based abroad learned of and protested the statue’s existence.

Acting Mayor Reinaldo Bautista Jr. asked the restaurant owners to remove the statue of the Igorot that stood unnoticed for years behind a wall where the sign “Bawal Umihi Dito” was posted. Also removed was the statue of a security guard pointing at the statue.

Bautista said he talked to the restaurant owners because he did not want the online campaign to become a full blown scandal for the city right after staging this year’s Baguio Flower Festival. The owners quickly obliged, the mayor said.

Bloggers identified with the Bibak network, a group of Cordillerans, cheered their success and vowed to pursue more online crusades, including one against a public TV series that allegedly misrepresents Igorot artifacts and culture.

“For members of minority groups like us who are often inaccurately written about by the mainstream press, cyberspace can be our best avenue for advocacy work,” wrote a female blogger who identifies herself as Bugan (www.splasher.halukay.com). “What I just did not expect is that I’d witness its immense power in just a matter of days. Simply amazing. Time to fiesta! Pun intended,” she said.

The blogger, who uses the pseudonym Bill Billig (www.igorotblogger.blogspot.com), said the restaurant’s decision to surrender to the bloggers’ demands was clearly “an easy victory” for online Igorots. [Source: PDI]

So it’s pretty much a straightforward report and it adds some important facts on the mayor’s decision to intervene on the matter.

Although I’m sure you know this already, I just wanted to state for the record that Bugan is not Splasher. Bugan is the one who took the before [here] and after [here] photos of the site where the statue was located. Splasher, on the other hand, is the one who first blogged about how Igorots are being portrayed in GMA-7’s Asian Treasures [here and here] .

Having made the above clarifications, we thank Vincent Cabreza for picking up this story. He also has a very apt description of who we are, “online Igorots”. I guess you will agree that it is a nice label for us, no?

6 thoughts on “The Peeing Statue: A Post Script, II”