Here’s an interesting article on a 1988 demonstration by Igorots/iCordilleras in Baguio to protest against then Baguio City Mayor Ramon Labo’s remarks about Igorots. This is what he reportedly said, “We will not lose [the elections] to those Igorots. They urinate anywhere . . . that is why we club them. . . . The Igorots are traitors. They are civil in front of you, but once you turn your back they stab you.” 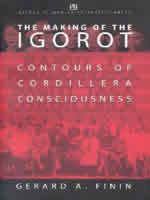 I was still too young to be a part of this demonstration. (Hehe, that’s a joke. I was actually based in Manila by then and didn’t know about Labo’s remarks.) I wonder if some of you were a part of this rally and would want to re-live the experience by reading about it. This article is actually part of the first chapter of a book on the Cordilleras written by Gerard A. Finin, The Making of the Igorot: Contours of Cordillera Consciousness. The book was published by Ateneo Press and was a finalist in the 25th National Book Awards.

The 1988 Igorot Demonstration
by Gerard A. Finin
It was not a day that Baguio City residents would soon forget. An hour after sunrise on 9 September 1988, people from throughout the chain of mountains termed the Cordillera—some four hours’ drive north of Manila—began assembling in front of Baguio City’s main post office. Sitting under a beautiful pine tree, I observed the crowd gather and subsequently joined in the socializing, albeit from the periphery. Some arrived after traveling by bus from nearby mining communities. Others came from local convents and seminaries. Many students rode jeepneys from their boarding houses and dormitories, alighting on narrow side streets since the city’s main thoroughfare, Session Road, was already closed to traffic.

Politicians arrived wearing suits and ties, easily accommodated by the temperate climate of Baguio’s 5,000-ft elevation that at the turn of the century had inspired Americans to establish the city as a colonial summer capital. For the most part teachers and other professionals came wearing styles prevalent in Manila, including the semiformal men’s short-sleeved barong Tagalog shirt. Some women decided to wear the “native” wraparound skirts, normally reserved for their natal villages, each with a brightly colored woven pattern that to knowledgeable local observers indicated from which general area of the Cordillera they hailed. Elementary and high school students from the private educational institutions wore their uniforms, anticipating that classes would resume in the afternoon. Most college students showed up in their usual jeans and tee shirts, a few symbolically donning a sash or vest of handwoven cloth distinctive to the Cordillera.

Several of the more adventuresome male collegians restricted their dress to loincloths, which were considerably more common in the days of their grandfathers. Also in keeping with Cordillera tradition, some of the male students brought with them gonglike brass instruments, or gangsa, to accompany their protest chants.

The orderliness, coordination, and wide range of ages represented may at first have suggested to some onlooking police units that a holiday parade, rather than a massive demonstration, was about to ensue. But the emergence of hundreds of signs and banners, not to mention a life-size effigy of the mayor, belied any such thoughts. Moreover, the sight of Baguio Vice Mayor Jaime Bugnosen pleading with the mushrooming crowd to keep the march peaceful did little to reassure law enforcement officials that this would be an ordinary Friday at the protesters’ city hall destination.

By 8:00 a.m. a crowd of some twenty thousand had assembled. Led by a truck broadcasting the event on live radio throughout the six provinces that constitute the Cordillera, the protesters began their trek down Session Road in the “City of Pines,” as Baguio has been known since the days of its initial design by famed American planner Daniel Burnham.

All this activity stemmed from remarks attributed to the newly elected Baguio City mayor, Ramon Labo Jr., in a Manila newspaper five days earlier, which, ironically, Cordillera residents seldom read. Labo was quoted in a Manila Chronicle (4 Sept. 1988) column as having said in Filipino at a recent dinner party for a visiting congressional committee that the Igorots are unworthy of respect. The statements attributed to Labo included: “We will not lose [the elections] to those Igorots.” “They urinate anywhere . . . that is why we club them. . . . The Igorots are traitors. They are civil in front of you, but once you turn your back they stab you.” Within hours of the column’s publication, photocopies were distributed around the city’s college campuses and coffee shops.

Because Baguio constitutes the Cordillera’s largest urban center for highlanders and lowlanders alike, the affront was felt deeply by the wide array of highlander ethnolinguistic groups that inhabit the Cordillera, many of whose native tongues are mutually unintelligible. And despite the fact that some of the protesters would not generally describe themselves as “Igorots,” most notably those highlanders from the provinces of Abra and Ifugao, it was understood that such distinctions are usually lost on lowlanders who comprise more than three-fourths of Baguio’s population. Regardless of semantic distinctions, the size of the burgeoning crowd indicated a deep sense of indignation that was felt by the protesters against a mayor who traced his origins to the nearby lowland province of Pangasinan.

The demonstrators’ placards and banners, expressed mostly in English, revealed much about how they viewed themselves both regionally and nationally. For some protesters, the grievousness of the insult prompted signs displaying uncharacteristic overstatement: “An Igorot is of more value than the whole world.” Similarly, another read, “You cannot put down a great race” [sic]. Perhaps drawing on an earlier time in American history, one college student’s poster proclaimed, “Igorot is Beautiful.” Others declared, “We Igorots say no to racism in our land,” and “We have inherent worth and dignity.”

Seemingly influenced by Catholic schooling, one student-held banner, nearly as wide as the road and written in the Cordillera’s lingua franca, Ilokano, exhorted highlanders and lowlanders to practice brotherhood. In a play on words alluding to the mayor’s lack of formal education, two other protesters carried a banner proclaiming, “Igorots offer ignorants up there a free education in Cordillera history.” Alluding to a much publicized book authored some forty-five years earlier by Gen. Carlos P. Romulo (1943, 53) which had claimed: “The fact remains that the Igorot is not Filipino and we are not related,” several demonstrators carried signs asserting “Igorots are Filipinos,” which also depicted drawings of a traditional head axe and shield. The most ominous message came from the Cordillera Bodong Administration, a group that, together with the Cordillera People’s Liberation Army, emerged from a brutal and bloody campaign by highland residents to stop Marcos regime-inspired logging and dam projects initiated during the martial law period. The banner read, “Mayor: We don’t glorify war, but don’t belittle our resolve to fight.”

2 thoughts on “Blast From the Past 1: "You Backstabbing, Public Urinators!"”