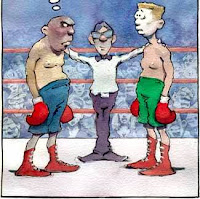 Oops, we thought we are done blogging about the recently concluded elections but things are happening in Baguio which are too interesting to ignore. Here’s how things are shaping up in the post-election bout between Domogan and Molintas:

Jose Molintas, the challenger: “You vote buying, cheating, board of election inspectors-influencing factotum of Gloria Arroyo who didn’t win fair and square.”

Okay, okay, our two protagonists didn’t actually say those things to each other. We made them up. Here’s what they actually said according to reports by Sunstar Baguio:

Jose Molintas: “The evidence indubitably shows that the said public officials performing electoral functions were given money or other material consideration to influence, induce or corrupt them, in blatant defiance of the prohibition of law,”

Mauricio Domogan: “Bury what was said.” [This quote is actually in reference to what was said during the campaign, and not a response to his opponent’s post-election allegations.]

Anyway, it seems like Joe Molintas is not going to go gently into that good night because he just asked the Commission on Elections to invalidate Domogan’s proclamation as Baguio’s Congressman-elect. Read story here. Interesting, no?

Are you, like us, wondering how our favorite COMELEC Commissioner and kailiyan Romeo Brawner will rule on this case? We’ll keep you posted.