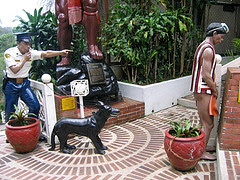 The picture above was reportedly taken in a restaurant in Baguio. I don’t know the name of the restaurant but boy am I pissed with the owners for their really bad taste.

Rather than passing inconsequential ordinances like forcing businesses to have English signs, it is things like this that the Baguio City Council should be looking into. My God, this restaurant is in Baguio which used to be the domain of the Ibalois and which still has a very significant number of Igorot residents, and the owners of this restaurant are apparently getting away with this? Are we going to allow this restaurant to piss at us in our own backyard? Maybe we should all go to that restaurant and collectively pee at its doorstep in protest. Here’s a video version of the same insulting restaurant statues.

Why? Because we are savages? Because we are a dirty, dirty people? Because we are uncivilized? Because we are uneducated and won’t be able to read a sign which says, “No Urinating Here/Bawal Ang Umihi Dito/Maiparit ti Umisbo Ditoy”. Because Igorots are so poor and won’t have the money to go to that restaurant anyway? Essentially, that is what the restaurant owners are saying. Igorots are dirty, uncivilized, uneducated, poor people and only a security guard will be able to stop them from peeing in public. I’m sure the owners are very pleased with themselves whenever their masterpiece is photographed and videoed by its clients and curious tourists.

Talk about reinforcing baseless negative stereotypes. Multiply this with other bad portrayals of Igorots and no wonder we have kids, bombarded with these images, who oh so hesitantly admit the fact that they are Igorots.

Our Lord Kabunian, if ever you read this blog, please send a bolt of lightning to this restaurant. But let’s not wait for Kabunyan to do the work, he might have more important things to do like sending a bolt of lightning to those Anglican Primates who think that they are the second incarnation of Christ. Before we totally get distracted, does anyone out there know the name of this restaurant and its contact number? Can you share it with us? If possible, can we contact them and raise our concern? Can we call up Baguio politicians and raise this matter with them? Its election period and maybe they will be receptive to the concerns of the people.