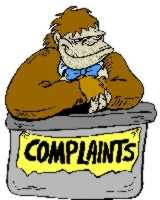 Thanks to Wil and Nats for identifying that restaurant which has the statue of this peeing Igorot man. It is the Barrio Fiesta Restaurant. According to Nats you pass by it when you go to Teacher’s Camp. Kayni will go take out the statue when she visits Baguio this year so she has a mission cut out for her. Advance welcome back to the Philippines, Kayni.

In the meantime, let’s have fun. I have no delusions that blogs and bloggers will somehow have any effect on anything. I think the effect of our blogging is that we feel good because we are able to express ourselves and communicate with like-minded people. So this exercise may be an exercise in futility. But heck, what harm does it do us if we do it, no? If nothing comes out of this then let’s call it “The Silence of the Lambs” and Kayni will really have to go to Baguio to remove that offensive statue.

Anyways, I’ve written a letter to two government officials expressing my concern about the Igorot peeing man. Initially, this letter was sent to officials of the National Commission on Indigenous Peoples (NCIP) which is the proper agency for concerns such as this. I would also like to send the letter to Baguio Congressman Mauricio Domogan and city officials of Baguio but I don’t have their email addresses. I may have to call up the Congressman’s office here in Manila if I can’t find his email. In the meantime I sent a copy of the letter below to the webmaster@baguio.gov.ph. I’m still trying to get the contact addresses for Barrio Fiesta Restaurant. Hope I can somehow get in touch with them.

Feel free to copy the letter below and forward it to said government officials if you agree that we are raising valid concerns. Or you might want to write a letter of your own.

Dear Sir,
Warm greetings. I am a blogger and I would like to raise my concern about a restaurant in Baguio, the Barrio Fiesta restaurant which has a statue of an Igorot man peeing in public. I came across a picture of this statue while I was surfing the internet. As an Igorot I am insulted by this statue and I am wondering whether your good office can do something about it.

I am attaching a picture of said Igorot peeing man and a blog post which I wrote expressing concern about this statue.

Thanks.
Bill Bilig
An Igorot Blogger
From the Boondocks

P.S.
By the way, I am also posting a copy of this letter in my blog.

The letter was sent to :
1. eainsigne@ncip.gov.ph
Atty. Eugenio A. Insigne
NCIP Commissioner for CAR and Region I

As I said, this may turn out to be an exercise in futility but its going to be fun. William Todcor has a post on deaf computers about how his emails to government offices never got any response. Lets see how responsive indigenous officials are to simple concerns such as this. So friends join in the fun, send your letters to our officials and blog about it 🙂