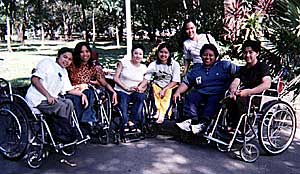 Want more information on Adeline Dumapong (4th from left)? As we mentioned in an earlier post, she is an Ifugao powerlifter who won the only medal (bronze) for the Philippines during the 2000 Sydney Paralympic Games.

Dumanayan from Ifugao.org has this additional information: Adeline was born in 1973 in Mabbalat, Kiangan, Ifugao. Three years later, she was afflicted with polio. With the help of some Catholic sisters, she transferred to Manila to study. Despite being wheelchair-bound, she finished her schooling with flying colors. In 1995, she graduated from St. Paul’s College in Quezon City and was given the best thesis award. Adeline was also a member of the Rondalla on Wheels. They visited countries like Germany, USA, Japan, Belgium to perform.

Aside from her bronze medal in Sydney, Adeline also has a silver medal from the 2002 Asian Paralympic Games in Malaysia. As earlier mentioned here, she also bagged gold medals in the ASEAN (Association of Southeast Asian Nations) Para Games where she currently holds the record for her event.