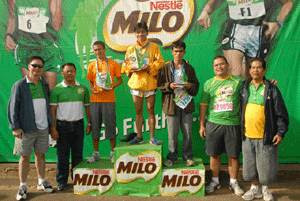 Congratulations to Jerry Lindawan of Tinoc, Ifugao for topping the Baguio leg of the 31st National Milo Marathon. We hope he goes on to win the 42 k grand final which is scheduled on 18 November in Manila.

Jerry Lindawan, who was just aiming for a top three finish in the 21-kilometer qualifying race, clocked one hour, 14 minutes and 23 seconds in claiming his first ever leg title in the annual foot race.

Or for a Tagalog version of the Tempo story, visit Journal.com.

From bsu.edu.ph, we discover that Lindawan is an education student of Benguet State University and he has been winning medals for his school.

We hope he continues to go on with his winning ways. Ever since Hector Begeo retired, we have had no top runner representing the Cordilleras in national and international athletic events. Maybe Jerry Lindawan will be the next Hector Begeo. Go Jerry!

UPDATE: As Brent wrote in the comments, the third placer in this race is Alunes Pudes is also a kailiyan. He is from Bauko, Mt. Province and may be related to Hector Begeo. Thanks Brent for the info.