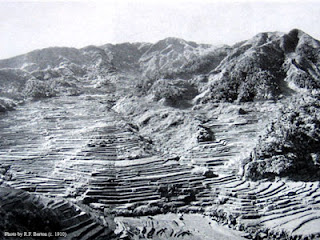 By Gina Dizon
KIANGAN, IFUGAO – Governor-elect Teddy Baguilat Jr lives and breathes home. Home is the rice producing province of Ifugao which boasts of its stairway terraces to the skies, the famous 8th wonder of the world. (Ed’s note: Officially, there’s no such thing as an 8th wonder of the world, see our earlier post here.)

Rice being the top product of the province, the young governor sees rice culture as a vital source of livelihood and a potential source of income to be developed too.

Currently heading the Save the Ifugao Terraces Movement (SITMO), Baguilat wants to bring the experiences of SITMO in the provincial level. (More about SITMO here).

For one, SITMO wants to popularize a viable method of transplanting rice seedlings at an early 10- day age and not at the usual 30- day maturity. Tried in the municipalities of Kiangan and Lamut, rice seedlings of the tinawon variety are transplanted early and spaced at least 25 cm from each other.

The rice planting technique forces the roots to grow deeper into the ground, grow more panicles, and yield more harvest when transplanted earlier. Tried first in Nueva Ecija by the Kalikasan Federation of Farmers in northern Nueva Ecija, it was found out that yield increased by at least 50% from the usual harvest.

Recently, SITMO won a 2-year grant from the United Nations Development Program which works on a biodiversity program for four towns of Ifugao.

These experiences shall serve as models in related programs in the provincial government which can be replicated in other parts of Ifugao, the development-oriented governor-elect said.

Ifugao is known for its mud- walled rice terraces which have been built centuries ago. Rice culture continued through the years and has been the livelihood of majority of Ifugaos since then.

Depending solely on rice farming is not a viable source of income and livelihood in this times of commercialized era however. Where most Ifugaos, if not most Cordillerans have terraced rice lands in limited scale, rice production is only good for at least 6 months and the rest of rice supply bought from the market.

With this, rice culture is seen as a diversified source of income where tourism comes in.
SITMO launched a rice terraces cycle tours which intends to offer a different experience to tourists. They will not just see the rice terraces but actually experience working on them, Baguilat said.

The community will be economically benefited as to the fees which the visiting tourist will pay including environmental, guide, entrance, and cultural show fees. While this is the case, the community also shares an age-old culture of planting and harvesting rice the indigenous way to the visiting tourist who does not only see and take pictures of the eighth wonder of the world but also try working on them.

Currently, SITMO in cooperation with Pochon Group will be spearheading the B’foto ad Majawjaw tour (Harvest tour) on June 22-24 at Mayaoyaw,Ifugao.

The package tour includes transportation within the province, a three-day meals and lodging, and the fees as earlier mentioned, a souvenir t-shirt and an ID and certificate for the participant-tourist.

These experiences furthering tourism for Ifugao and generating income for the community shall be elevated in the provincial government through advocacy policies promoting eco-cultural tourism for one.

Packaging the rice wine is also a need. Ifugao wine makers bottle their wines in the San Miguel 4 x 4. Baguilat sees the need to support packaging of Ifugao products including rice wines.

Participatory development
Development for the province needs the participation of the community. For this dynamic governor in his early 40s, Baguilat wants to see progressive politics in Ifugao at least. “It is a development-oriented approach in terms of decision making on the appropriations for the allocation of funds for one. It is looking beyond tomorrow, towards the future.”

For example, “we want the community to decide what tourism they like in their community. They will decide the dos and don’ts. What is important is that you have a protected area”, he said. With this, Baguilat commented that Banaue is fast losing its rice terraces with the gradual building of houses in rice-terraced areas.

Baguilat asks, would they (the community) want to see rice terraces 50 years from now? Who will work on these rice terraces? What kind of development would they want? How relevant is culture in this modern times?

And one major approach in making progressive politics happen is to involve civil society groups in local governance. Baguilat wants the private sector like the church-based groups, cooperatives and non government organizations be part of special bodies of the provincial development council take part in decision making and local governance.

Progressive politics is also making a stand against traditional politics. It is making a stand against corruption. For this youthful leader who dons a ponytail as a sign of protest against corruption, he considers worth supporting the initiatives of community groups like the monitoring and evaluation systems of the church-based Social Action Development Center (SADC) in monitoring government programs and likewise curbing corruption.

And for corruption to be gradually eradicated, “I have to start with myself”. The two- time (he was governor in 2001-2004) governor-elect said corruption means not receiving SOPs. “Where one contractor has won his contract fair and square, then he does not have to give an SOP and bribe a public official,” he said.

“Corruption is not only malversation of funds. It is also poor planning”. Baguilat sees development as a wholistic and interrelated approach to development. Capability building and provision of support services are necessary to make a development program finally redound to the people in the community. For example, not only are roads built. Livelihood trainings are given and the necessary packaging and market outlets will be established to support a person’s initiatives and a community product.

Note: Gina also writes for the Northern Philippine Times which has a blog here.

7 thoughts on “From the Rice Terraces to Policy Advocacy”