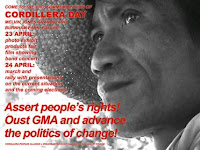 Our friends from the left will be celebrating Cordillera Day in Baguio City on 23-24 April. As you may already know, Cordillera Day was used to be called Macli-ing Dulag Day because it was initially held to commemorate the death of the man who led the people’s opposition to the Chico River Dam. [You may want to read our brief posts about Dulag here and here.]

The Cordillera Peoples’ Alliance, the main organizer of this annual event, then changed the name to Cordillera Day to recognize the other martyrs from the Cordilleras who died fighting (or who were simply killed) for what they believed in . [Some of them are listed here and the latest one is here.]

Though we do not entirely agree with our friends from the left, we believe that they do have a valid analysis of what’s wrong with our society. For instance, they are correct in asserting that the scandalous poverty situation in our country is mostly because of the oligarch’s stranglehold on our country’s resources. And they are also correct in saying that the government appears to be more interested in protecting the interest of the privileged few than in serving the many who are poor.

And the facts do back them up. Indeed, if the government is really interested in serving the poor, then it should have implemented a genuine agrarian reform program (this is an undying issue precisely because the government failed to solve the problem of land inequity), it should have stopped paying the personal loans of Jose de Venecia and other Marcos cronies (using our taxes to pay said loans), and it should have passed a law that effectively banned political dynasties. At marami pang iba. Etcetera. Etcetera.

On the other hand, it is also good to remember that our leftist friends are not angels either. We disagree with their brand of justice like this one and we also disagree with their use of violence (at least those who decided to use violence as their means of expressing dissent against the current system).

Anyway, we wish our friends a Happy Cordillera Day! And we hope that Palparan and his ilk will not be showing their ugly heads in Baguio.