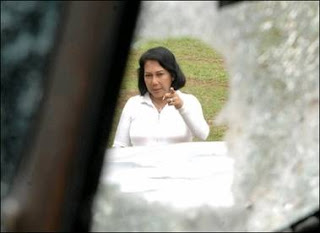 Abra will have a Representative when Congress opens this month. Congratulations to former Lagayan Mayor Cecilia Luna (seen in photo above through her bullet riddled campaign vehicle) who won over ex-Governor Vicente Valera for the post. Luna was proclaimed by the Commission on Elections (COMELEC) last Wednesday, July 11.

This marks the first time in 20 years that the Valeras, who ruled Abra since EDSA Uno, will be out of power.

Again, congratulations to Abra’s new Congresswoman. However, we would like to echo this comment from Abrenian.com: “… lead us not into bad but in peace and progress..”

UPDATE: Valera reveals that he is going to contest Luna’s proclamation even if he has to go all the way to the Supreme Court. Report here.