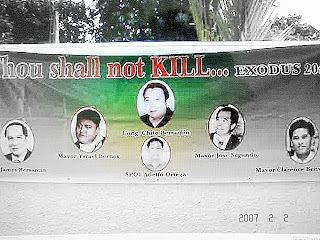 THOU SHALT NOT KILL: The above poster courtesy of Abrenian.com expresses the sentiments of Abrenios who long for a province where political killings are a thing of the past. An accompanying article asks: “Will killings be stopped as a means of silencing rival politicians? The reality is that the people of Abra are already fed up. But will they translate this to intelligent votes this May 2007 election?” [Source: Abrenian.com]

MT. PROVINCE TO NESTLE: “DON’T MAKE PROFITS OUT OF BABIES!” A mother who gives birth in Mt. Province hospitals is normally advised to breast-feed her baby within one hour after birth. For a baby born through caesarian, he or she is endorsed for wet nursing (lang-ay) while the mother is still under the effect of anesthesia. This means the baby would be brought to a nursing mother or health worker for breastfeeding. The hospitals prohibit the entry of any milk formula. [Source: Mother/Child Dyad Blog]

IF BAGUIO FOLKS ARE LUCKY, THEIR FLYOVER WILL BE BUILT BY 2099. Well, actually it should be built by 2010 but don’t be surprised if its still not finished by then because of higher cement prices (which is the ridiculous excuse why its not yet finished; they budgeted daw kasi for 2000-01 prices). It seems like suspended Baguio Mayor Braulio Yaranon, who objected to the flyover, will be having the last laugh. Wil Reyes has a post and some pictures of this cursed flyover project. [Source: PDI via Asian Journal]

NOW, IFUGAO HAS THE BEST WEBSITE. The province of Ifugao might not have fared well in an NSCB official’s ranking of the best managed provinces but it can certainly boast that it now has the best website among Cordillera’s local government units (LGUs). You might want to read our original review of the LGU websites here.

Now, an update: Ifugao, as mentioned, now has the best website in the region. It is full of useful and interesting information and is quite easy to navigate. Baguio City has a very promising beta version of a new and improved website. Apayao also redesigned its website and thank God it no longer has that forum section where all you read are spam messages promoting Viagra. Mt. Province remains the same but you can download their monthly newspaper here. Kalinga still has that cute but culturally inappropriate Linux penguin in its main page. Benguet’s website remains the same but for some reason, it now doesn’t look good when viewed with a Firefox browser. Abra [abra.gov.ph] still has a photo of the spouses Valera prominently displayed but, apparently, there’s an alternative provincial government website for Abra [abra.ph].

DON’T EVER EVER SIT ON A KORAN. That’s our message to our kailians in the Middle East (or anywhere for that matter). Okay, this is old news but the message remains very relevant. Serafina Toyan, a kailian from Kibungan, Benguet spent a month in an Abu Dhabi jail for accidentaly sitting on a Koran. She was also wrongly accused of eating a chocolate bar kept in her employer’s refrigerator. [Source: Delmar Carino]

I LIVE MY LIFE THROUGH REX PE’S BLOG. I’ve always wanted to go to Tibet and meet a Buddhist monk who will tell me really insightful things like, “Brother the fate of the bird is in your hands” but I think my dream will be realized only in another lifetime. In the meantime, let’s just imagine that we are in Tibet by looking at the blog of our kailian Rex Pe who recently uploaded excellent pictures of Shangri La. [Reflections Unlimited]

ANY READER FROM MACAU? Two Bontoc kids are looking for their mother, Florinda Fangkingan Dupilpil who left for Macau two years ago. She has not contacted her family since then. In case you’ve met her or you know anything about her whereabouts, please contact her father Antonio Fangkingan at: Cell phone 0063–(0)9168380414 or Email: afangkingan@yahoo.com. [Source: mtprovince.net]