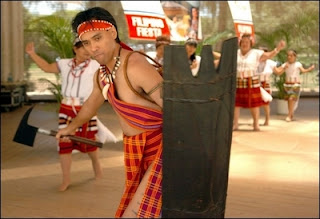 UPDATE: From the comments section:

“Hugo Prill Sr., BIBAK Hawaii president clarifies that BIBAK Hawaii did not perform in 2006. The photo is of a Hawaii-based dance troupe performing and donning something “BIBAK”.

BIBAK Hawaii did perform in 2007. The photo in this Honolulu Advertiser article is BIBAK Hawaii.”

A BIBAK group performs during the 100th year anniversary of Filipino immigration to Hawaii held last May 2006. In case you are wondering, meron din tayong Igorot/iCordillera blogger in Hawaii, si Hip Nanay. Visit her blog here.

4 thoughts on “Picture of the Day: Igorots in Honolulu, Hawaii”