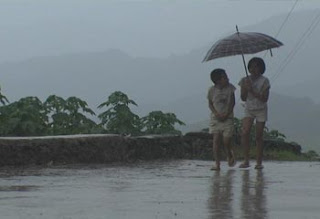 If you ever have the chance to watch the independent film Daan Patungong Kalimugtong, make sure you go watch it. (Or you might be better off buying a VCD/DVD copy if they are available because, as we noted in other movie reviews, digital Filipino films just do not translate well on big movie screens; they get overblown and lose much of their color.)

Kalimugtong is a really good film. Aside from the fact that it is well made, here are several reasons why I liked the movie: all the actors are our kailiyans (one of whom, Analyn Bangsi-il won an award as Best Child Performer); they used Ilokano as the medium (although there are also dialogues in English and Tagalog); they have beautiful shots of the mountains we all love; the musical scoring is terrific. And, oh, did I say it was a really good film?

Okay, the film is not really story-driven. You will be disappointed if you are looking for obvious movie ingredients such as conflicts, suspense, thrills, highlights, and a final resolution. You won’t find those things here; the film, after all, is about the ordinary life of two siblings as they go about their ordinary daily routine.

This means that the movie tends to be repetitive: kids walking to school (there’s a lot of walking here), kids doing household chores, kids looking after their grandfather, etc., etc. Despite this ordinariness, the movie is never boring (at least I wasn’t bored) and it, in fact, manages to draw you to be invested in what’s happening as the movie unfolds.

I am not sure if Kalimugtong is fictional or an existing barangay or sitio but this movie is set in Benguet. I think the movie manages to capture the Benguet local color with its sayotes, and mines, and DZWT broadcasts. It also ably portrays the challenges confronting people from the Cordilleras (unemployment, poverty, etc) and it does this without getting preachy, a common mistake of independent “socially relevant” films.

Another thing I like about this film is that there are no unnecessary Cordillera/Igorot scenes. If you remember our review of Batad sa Paang Palay, we criticized it for scenes which do not add to the story (people playing gongs, a man doing a ritual, etc) but which the director still added probably to shout to the world that he is making a Cordillera/Igorot movie. Thankfully, there’s nothing like that in Kalimugtong. Again, don’t get me wrong: there’s nothing wrong with movies showing Igorots dancing or Igorots doing rituals but if they don’t add to the story then such scenes are simply gratuitous.

Kalimugtong director Mes de Guzman should be praised for this film. Whatever awards he received, and there are many, are very well-deserved. Kudos also to the local actors (aside from Bangsi-il the cast includes Rhenuel Ordoño, Hallen Sumingwa, Jay Bassig, and Joey Almoete) who all did a convincing job in their respective roles.

Incidentally, you might want to visit the Northern Dispatch Blog which has an interview with Hallen Sumingwa about her role in this movie.