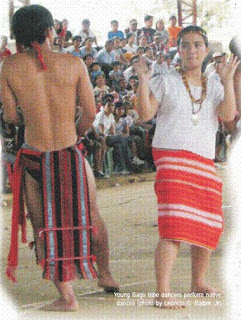 Whenever I hear old people talk about the times that they traveled by foot to Candon, I always thought that Candon is somewhere near the Cordillera mountains. You know, like the boundary towns of Cervantes in Ilocos Sur and Bagulin in La Union, so it won’t be a big deal if one goes there. It turns out that Candon, which is now a city, is way out west in the Ilocos coast. So our ancestors who walked all the way to Candon to trade their goods for a bag of salt must have really walked long and hard to get there. Mapapahiya ang mga bata ngayon na konti lang ang nilakad ay pagod na pagod na daw.

Anyway, Candon City has a significant number of Bago Igorots who, like Igorots just about anywhere, continue to celebrate their cultural roots. They have an annual tribal festival “aimed at enriching indigenous customs and traditions of the nine indigenous cultural communities of the Bago tribe .”

For non-Ilokano speakers, Danny’s report states that the festival showcased traditional competitive games (like tug o’ war, “torsi” and “sangol”), a dallot singing contest, and rice-wine making. Caveat: This may not be the exact translation, after all I’m not a native Ilokano speaker. And I don’t even know what “salip” means.