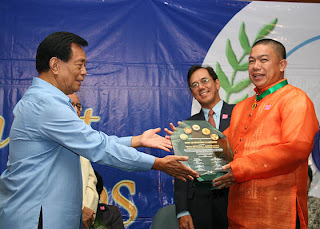 Last November 2006, Sabangan, Mt. Province Mayor Jupiter Dominguez was named as the nation’s Most Outstanding Municipal Mayor beating other nominees from different parts of the country.

This recognition from the Local Government Leadership Award was given to the Sabangan mayor “because of his inspiring leadership by instilling the people of Sabangan town with the spirit of hard work, dedication and commitment to excel amidst trials while preserving the unique indigenous culture and practices.”

According to a reliable source (he he pa-reliable reliable source pa dito ano), an important factor (among many other reasons) which might have clinched the award for the mayor was that when award organizers visited Sabangan to check him out, they found him operating a bulldozer to clear the road for vehicles. Apparently, there was a typhoon when the organizers visited so they were naturally impressed. Eh sino ba naman ang hindi mai-impress sa isang mayor na nagtratrabaho sa kalagitnaan ng bagyo.