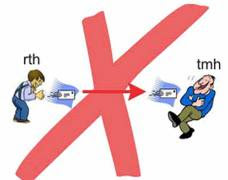 Wow! The art of letter writing really bloomed in this past elections, no? We’ve heard about letters being sent by Sagada politicians to each other (but which was also furnished to Sagada voters). We hope to eventually get copies of said letters and to publish them here if they are praiseworthy or “mockworthy”. There’s also an interesting letter sent to our iSabangan kailiyans and a response to said letter by some concerned iSabangans which you can read at the Northern Philippine Times blog.

In response, a group of concerned iSabangans hit back at the Youth Brigade. Their letter is much longer but it could be shortened to: “Duh! Ano’ng akala ninyo sa amin baboy na binibili?”

Rather than publishing the letters here, we suggest that you go read them at the Northern Philippine Times blog because you can also read lots of news about the Cordilleras in said blog.

Bakit hindi panalo ang Youth Brigade? Eh paano ba naman, nanalo na nga ang kanilang kandidato eh nagpuputok pa ang buchi nila. Why the vindictiveness? In three years time, Victor will be running again and if he and his supporters continue to be vindictive it would be harder for them to get back the support of iSabangans.

Anyway, here’s our unsolicited advice to the unfortunately named Victor Dominguez Youth Brigade: Change your name kids! It sounds too much like the Hitler Youth Brigade. What next, are you going to be saying “Heil Victor!” and raising the swastika?

UPDATE: In case you want to read more juicy letters, this time related to Congressman Dominguez’s selective (or vindictive) scholarship program, then you should visit Freedom Rings who has thankfully uploaded the letters for us.