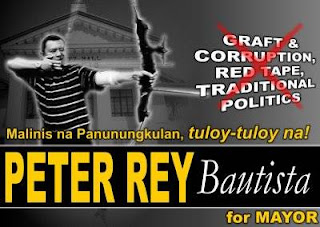 Lisa Araneta of i-Baguio.com has an update on how the Baguio City councilor’s voted on the “let’s buy cars for ourselves” scandal. Read it here. We are with Lisa in hoping that Mayor Peter Rey Bautista will veto this ill advised budget legislation.

So the ball is now in the mayor’s court. Let’s see whether he stays true to his electoral promise that he’s going to be “Simple Lang”. But we should also help him decide by revisiting his campaign materials in the past election.

Our message to the mayor: Oy ang galing mo sa archery ah. Sir, this kind of self-serving legislation is also known as traditional politics. Please kill it with your arrow. Dapat bull’s eye.

For those of you who like videos, here’s a campaign video courtesy of the mayor’s multiply site:

Those who are “friends” with the mayor in Multiply might also want to remind him of his pangako. You can also comment on his blog here.

He also included his email in his Blogger profile so we are publishing it here (peterreybautista[AT]gmail[DOT]com) in case some of you would like to get in touch with him personally. I believe there’s nothing wrong with emailing him since he himself made his email public.

2 thoughts on “The Ball is in His Court”