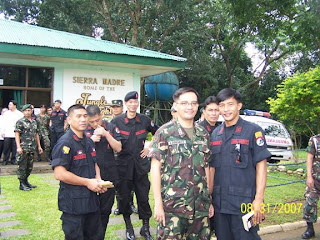 Now, the answers to your questions.

What is Capt. Guinolbay’s case and how is he doing?
Capt. Ruben Guinolbay is charged with violations of the Articles of War 67 and 96, mutiny and conduct unbecoming an officer and a gentleman, in relation to the 2006 Marine stand-off incident in Fort Bonifacio. He is with the Army Scout Rangers.

The pre-trial investigation panel cleared him of all charges, but the findings were reversed by Gen. Esperon and so his case, together with those of General Renato Miranda, former Marine commandant, General Danilo Lim, Capt. Guinolbay’s commanding officer in the First Scout Ranger Regiment and others have proceeded to court martial.

The case is being tried in Tanay, Rizal, where the men are currently incarcerated. General Esperon’s only explanation for the reversal is, “Because I can.”

Cpt. Guinolbay is fine, if a bit thin. He tries to keep busy reading (though we’re running out of books to send him), taking care of small animals (chickens, turkeys, rabbits) and keeping fit, all in spite of the terribly adverse conditions of their incarceration.

Visitors are stringently monitored and restricted (family and lawyers only). He would love to get any communication, which you can send through my email address (trixiecruzangeles AT gmail DOT com) or if private, send a handwritten, sealed letter to the following address: Angeles Law Office, 2nd floor National Museum Building (former Executive House), P. Burgos corner Finance Road, Ermita, Manila. It will reach him within the week.

On Capt Somera
If this is Capt. Lawrence Somera, he is with the group incarcerated for the Oakwood mutiny of July 2003.

Taga saan sa Ifugao si Capt. Guinolbay? Is it true he was tortured? Does he feel that he betrayed his country?
I’m not sure where in Ifugao he is from, I will have to get back to you on this one. There is a hearing on Friday, 19 October 2007, we will ask him then. He was not tortured, but he was detained long before he was charged with any offense. However, what has been most difficult is the incarceration in Tanay, which places him far from his family, and severely limits his communications with them. The stringent visiting rules also make it difficult for the rare times that his parents can come over from Isabela to visit him.

My questions for them would be, What keeps them going? What strengthens them these days? What advice would they give new PMA graduates?
What keeps Capt. Guinolbay going is their strong belief that they have done the right thing, that history will prove them right in the end. I will have to inquire with him as to the answers of the last two questions.

Bill, thank you for this opportunity to tell people about Capts. Guinolbay and Langkit. They need all the support they can get, considering the difficulties of their situation now.