And Now the Search for Justice 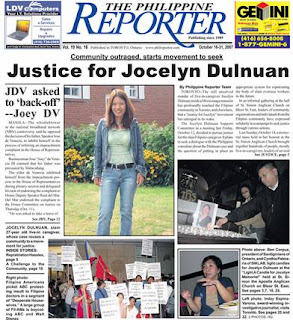 Toronto Updates:
Our thanks to Tan Canchela for forwarding us the link to the Philippine Reporter, a Filipino community newspaper in Toronto which covered this tragedy.

Hermie Garcia: The groundswell of community support generated by the Oct. 1 murder of 27-year old live-in caregiver Jocelyn Dulnuan is very encouraging. The struggle for justice in the Jeffrey Reodica fatal shooting by a police officer is still fresh in the minds of Filipino Canadians in Toronto . Yet here comes another campaign for justice for the community to take on. Read the full article here.

Statement from the Consulate: From the time it learned of the untimely demise of Jocelyn Dulnuan, the Consulate General has been in touch with Police authorities concerning the case, including coordination for the repatriation of her remains to the Philippines. Read it here.

The Philippine Reporter Team: The still unsolved murder of live-in-caregiver Jocelyn Dulnuan inside a Mississauga mansion has profoundly touched the Filipino community in Toronto , and elsewhere, that a “justice for Jocelyn” movement has emerged in its wake. More here.

Philippine Updates:
Bulatlat.com has the report on Jocelyn’s homecoming:
In white and black clothes, family members and relatives have waited for Jocelyn’s remains at the PAIR-PAGS Center of the Ninoy Aquino International Airport (NAIA). The first ones to arrive included husband Sandy Kinnud, followed by mother Godeliva Dulnuan and other relatives. Read the whole story here.

As a result of this tragedy, the province of Ifugao is now coming up with a database of Ifugao OFWs.

Inquirer: Ifugao officials have launched a survey to determine where their villagers currently work overseas, in the aftermath of the murder of 27-year-old Jocelyn Dulnuan, a licensed criminologist who was found dead in her employer’s house in Canada where she worked as a maid.

Ifugao Governor Teodoro Baguilat said he needs to keep track of overseas Filipino workers who come from his province “to be able to assist them in emergencies so we can avoid future controversies.” More here.

Northern Dispatch reports on a prayer vigil for Jocelyn in Baguio: In a vigil-prayer which Migrante led, one of her kailian said, “Maysa manen nga ina ken anak ti natay. Napan agbiruk ti pangbiag na ti pamilya na. Nu adda kuma ti desente ken usto a suporta iti gobyerno, haan a maaramid daytoy,” (One more mother and daughter has died. She searched for a livelihood for her family. If there was a decent and just support from the government, this wouldn’t have happened) as she called for justice for Jocelyn. Read the whole story here.

For our previous coverage on Jocelyn Dulnuan, click here.