Where Can You Find Kalinga – Apayao and Benguet? At Sea Of Course!

Here are photos of our ships (well they named it after us so let’s call them our ships). The one on the left is BRP Benguet while the one on the right and on the bottom is BRP Kalinga-Apayao. 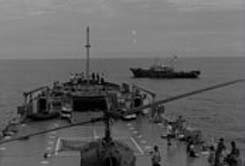 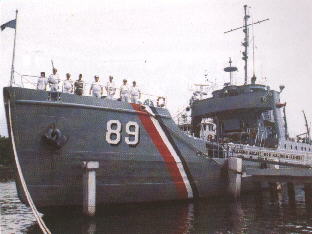 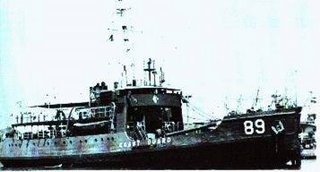 Not very modern looking at all huh? Yeah but what do we expect? We’re third world you know. For those interested in ship lore, the BRP Kalinga Apayao actually used to be the South Vietnamese ship Can Tho which used to be the USS Garrett County. Its history is described in this website: “ (LST-786). Transferred to in . Escaped in 1975. Was laid up in after the fall of and acquired by the Philippine Navy in 1977. Funding was approved and the ship was programmed to undergo an extensive refit in 2003/04. This has however been put on hold with the funds going towards the deposit for future acquisitions.” Interesting? Of course, any story about escaping from is definitely interesting.

What about BRP Benguet? The ship was also acquired from the U.S. Navy but its past life has not been as dramatic. However, it has interesting exploits in recent times as it figured in a number of encounters against Chinese forces. In 2002, it ran aground in the and the Chinese have accused the Philippine Navy of doing this on purpose to establish another point of presence in the disputed area. Lighten up China, the ship is old so it can run aground anytime it wants.

So there you have it, our ships sailing the Philippine seas, protecting our territory and serving as the nation’s defense against the mighty Chinese who, by the way, are monitoring us. The ships are obviously old but what can we do. Having Kalinga-Apayao and Benguet guarding our sealanes, no matter how ancient they may be, is better than nothing. I think they are more reliable than a politician guarding the integrity of the ballot box.

2 responses to “Where Can You Find Kalinga – Apayao and Benguet? At Sea Of Course!”