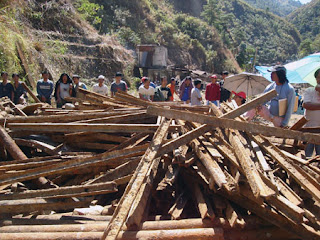 SO DID THE DAVIDS WIN OVER GOLIATH? Community folks stopped Benguet Corporation from resuming its mining operation in Barangay Virac, Itogon (photo above, courtesy of Nordis Blog). Former miner and resident Mariano Lango: “The only ore body left here are the mine pillars. We know this because we worked the mines for the company before the 1990 earthquake forced it to close and allow us to live and make a living on the surface. Mining the pillars, this close to the surface will make the ground collapse. We cannot allow that to happen.” We hope that the victory is not just a temporary one.[Nordis Blog]

SHRIMP ANYONE? Yes you can raise shrimps in the mountains. Ifugao is apparently leading the way. But then again, Lamut is in the lowland part of Ifugao so maybe raising shrimps in the Cordillera mountains has not yet been tried. [PIA]

ELECTION FEVER. Who’s your gubernatorial bet? Our friends who come from Kalinga might want to join the online poll and discussion here. Incumbent Governor Dominador Belac is currently leading the poll. [Kalinga Tambayan]

ELECTION FEVER TOO. All of a sudden she-who-must-not-be-named is allotting money for Cordillera autonomy? Well, she’ll do just about anything to smell good in our noses and to look good in our eyes, eh? [Sunstar]

A NEW BAND RISES. And they have a very interesting name, Pe’Tune (pronounced like pechen or peace pact among iFontoks). Will they rise up to Pagano’s challenge of producing indigenous-based music that captures a mainstream audience? We hope they do! [Freda Changat]

“MATAGOAN” CITY. The bicameral committee of Congress endorsed the bill which seeks to convert Tabuk, Kalinga’s capital town, into a city. Now it’s up to the President to sign the bill and to the Tabuk voters to vote for cityhood in a plebiscite. If things push through as wished by those advocating for cityhood, Tabuk is going to be called a “Zone of Life” or “Matagoan” City. Are you listening, Pedro Ramos? You can’t brandish your guns in Tabuk no more! [Sunstar]

DUH, ITS NOT LIKE WE ARE IN QUEBEC. Wala bang ibang problema sa Baguio at signboards na lang ang inaatupag ng mga kagalang-galang na miyembro ng konseho? What next, a language police? If businesses don’t like to put up their signs in English then its their loss. Now if you are going to require them to put up their signs in Ibaloi, in honor of Baguio’s roots, then we will gladly jump on board. [baguiocity.gov.ph]

RELATED POST: The Week That Was. PHOTO CREDIT: Nordis Blog.