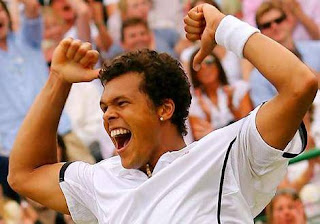 Hello kailiyans Down Under! Are anyone of you watching (or monitoring) the Australian Open? Kind of interesting results so far, no? Upsets began on Day One and kept going. I’m glad Roger Federer is still there and I hope he wins the title. I wouldn’t mind though if the young ones (particularly Djokovic and the Tsonga kid) end up winning.

On the women’s side, I’m kind of disappointed that Henin lost. But she has many Grand Slam titles already so maybe it’s time for the other players to have a Grand Slam of their own. I’m hoping that one of the Serbian girls win. Go Ana and Jelena, let’s make it an all Serbian finals.

Wil, what say you of the Australian Open? Much more interesting to watch because of the upsets eh?

By the way, is Jo-Wilfried Tsonga part Filipino? Just wondering because methinks only a Filipino mom would come up with a combined/hyphenated first name like Jo-Wilfried 🙂

3 thoughts on “Watching the Australian Open”