Sayote: Green Gold From the Boondocks 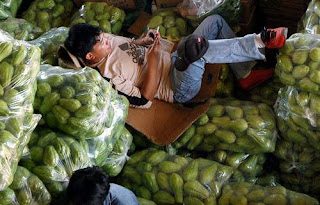 Some tidbits about sayote:

* Wangal, La-Trinidad produces the best sayote according to people from Wangal. [Source, scroll down]

* The raw pulp can be used to sooth skin rashes. The roasted leaves help in the suppuration of boils. [Source] (Comment: How does one roast the leaves?)

* We Igorots, who are not really known for our cooking skills, cook sayote by dumping chunks of them along with things like etag or beaten-to-death chicken in a potful of boiling water. Thankfully, JMom has a post on how you can cook guisadong sayote to add to your (I’m guessing here) non-existent culinary skills.

* The sayote shoots which you buy in the Baguio City Market are nothing but sayote leaves. It’s not good for pasalubong unless you don’t like the person you are giving them to. [Source: Personal Experience]

* Sayote is rich in amino acids and vitamin C according to wikipedia.

* Sayote Myth 1: In Australia, a rumor has floated around for years that McDonalds Apple Pies were made of sayote, not apples. This eventually led them to emphasize the fact that real Granny Smith apples are used in their pies. Interestingly, sayote is more expensive than the apples supplied to McDonalds Australia. [Source: wikipedia]

* Sayote Myth 2: Due to its cell regenerative properties, it is believed as an urban myth that this fruit caused the mummification of people from Colombian town of San Bernardo who extensively consumed it. The very well conserved skin and flesh can be seen in the mummies today. [Source: wikipedia] (Question: Did our Kabayan ancestors use sayote to preserve the mummies?)

* Sayote “co-starred” in the movie Daan Patungong Kalimugtong which we reviewed here.

NOTE: I was thinking of doing a post on why sayote is called a “green gold” but got distracted by all the above tidbits. Anyway, I’m sure you know why it is called the green gold from the boondocks 🙂

20 responses to “Sayote: Green Gold From the Boondocks”