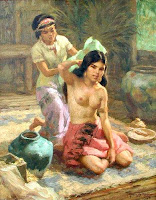 Rather than rehashing the “Is Urduja Fact or Fiction” debate here, you would be better informed if you visit the Pangasinan Blog where this issue is much discussed: The Case for Princess Urduja, Tawalisi in Pangasinan?, Kingdom of Talawisi: It Seems It Existed, Historian Wants Urduja House Renamed.

Now, one evidence being put forward by those who argue that Urduja is real and that Talawisi can be located in the Pangasinan area is the oral history of our Ibaloi kailiyans which traces the Ibaloi ancestry to Urduja.

From Chi Balmaceda Guiterrez’s In Search of a Princess:

Urduja’s name still has great resonance among the Ibaloi, one of the major ethnolinguistic tribes in the Cordillera region. Dr. Morr Tadeo Pungayan, a respected scholar of Ibaloi culture and professor at the St. Louis University of Baguio City, said, “Linguistically, Urduja is Deboxah (pronounced Debuca) in Ibaloi. We’ve always had a woman named Deboxah from time immemorial among the genrations of Ibaloi. The name usually describes a woman of strong quality and character who’s nobly descended. That name is an Ibaloi name. That’s why Ibaloi trace their ancestry from Urduja”.

The Cordillera tribes, also known collectively as Igorots, pride themselves as being the only ethnic group that doesn’t talk about the origin of man according to Spanish chronicles. Among the tribes, genealogy and family history are orally passed history. The Ibaloi, just like other highland tribes, could easily trace their ancestry. This is ensured by their custom of naming newborns after ancestors to help keep their memory alive and evoke affection and protection.

A book on the history of Benguet province, written by Anavic Bagamasbad and Zenaida Hamada-Pawid, shows the Benguet genealogy tracing tribal family lines from the year 1380 to 1899. The book says, “The extent of inter-settlement alliances is climaxed in the memory of Tublay informants with the reign of Deboxah, Princess Urduja, in Pinga. She’s acknowledged as the granddaughter of Udayan, an outstanding warrior of Darew. Her death signaled continuous decline of kinship and alliance between highland and lowland settlements.”

Hah! That should put the Urduja doubters in their place, no?