I’m sure the Ifontoks who held rallies for the preservation of the Mt. Province Capitol will be happy to know that their beloved building is being featured in the 2007 Calendar of the Heritage Conservation Society (HCS).

Here’s a picture of said calendar (courtesy of Ivan About Town) and a bigger picture of the capitol (courtesy of the HCS). You can go to Ivan’s site for details on how to buy a copy. My hope is that the HCS people will send copies to Mt. Province to make it easier for people interested in buying a calendar. 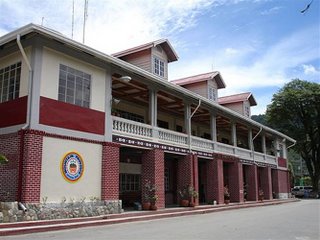 Anyway, the fact that this capitol still stands is proof of how community activism can help reverse a government decision, a decision which can be described as somewhat lacking in foresight. What happened was that the provincial government wanted to demolish the building to replace it with a much bigger one. If you’ve been inside the capitol you will understand the desire for a bigger building; the people who hold office there are really cramped.

Still, is demolishing the oldest capitol in the (and one of the few remaining visible legacies of the American colonial period) the only solution to cramped office space? The people in Bontoc didn’t think so and decided to hold rallies to have the capitol preserved. Their argument went something like: “Cha, en patakder kayo man si safali ay building.” (Translation: Hey, why don’t you build another building.)

Thankfully for them, for us, and for posterity, the provincial government listened to the protesters and scrapped the plan. (Didn’t I tell you here that Cordillera activists produce results?) Eventually, officials decided to just renovate the capitol with the original structure intact.

So all’s well that ends well. The capitol gets preserved. Our children will be able to appreciate its quiet elegance in the future. And the Bontoc protesters get a well-deserved tribute from publishers of the 2007 HCS Calendar.

ADDITIONAL TRIVIA: This Capitol was completed in 1909. It survived the Second World War and the fires which occasionally devastated the town of Bontoc. It was designed by Daniel Burnham, the famous architect and city planner who designed numerous government buildings, the Luneta Park, and the city of Baguio. Kaya talagang dapat bigyan ng value 🙂 Source: Roger Sacyaten in Mt Province.net

2 thoughts on “Preserving Our Colonial Heritage”