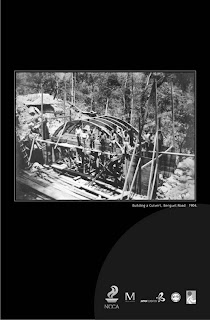 Hey you, Manila based readers. Are you looking for interesting things to do? Then check out the following activities of Philippine Nikkeijin 2007. In case you are wondering, Nikkeijin refers to the descendants of Japanese immigrants to the Philippines (and other countries).

A significant number of Nikkeijins are in the Cordilleras where Japanese workers who were hired to help build Kennon, Halsema, etc. settled and married the locals.

Anyways, check out the following events organized by the University of the Philippines Asian Center, the UP Vargas Museum, The Japan Foundation, National Commission for Culture and the Arts, and Filipino-Japanese Foundation of Northern Luzon, Inc. Our thanks to Michiyo Yoneno-Reyes for sending us the information.

Makoto Sugii (Miyagi Gakuin Women’s University)
“Japanese Descendants in Baguio-Cordillera and their Contact with the Post-war Japanese Visitors to the Philippines: 1945-1973

Shun Ohno, Ph.D. (Kyushu University)
“Deterritorialized Identities and Citizenships: The Implications of the Shuttling between the Philippines and Japan by the Philippines Nikkeijin”

“Tracing the Nikkeijin of Panay: Roots and Prospects”

Film Showing:
“ABONG: Small Home” (Director: Koji Ima Izumi, 2003)
It is a story of the a 2nd-4th generation Nikkeijin family in Northern Luzon.

If you need more details, please contact the Asian Center, University of the Philippines, Diliman, Quezon City at asianctr@up.edu.ph or telefax: 02-927-0909. Or visit its website at www.upd.edu.ph/~ac