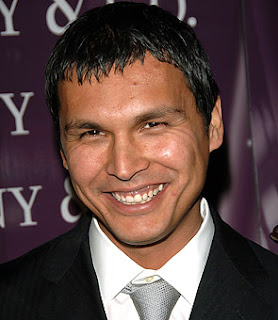 CHANGING STEREOTYPES. Native Canadian (Ojibwa) actor Adam Beach on changing misconceptions about Native Canadians/Americans: “I want to change those stereotypes because they’re wrong. There’s a lot of ignorance out there in many ways. I don’t drink, I don’t take drugs, I don’t smoke cigarettes – I’m out to change the way people think about natives.” Adam co-starred in films such as the Windtalkers and Flag of Our Fathers. [Source: The Vancouver Sun via The Native Blog]

In an interview with Time Magazine, he states: “I want Native children to have success within their hopes and dreams. The history of Native American people is tragedy. I want to show that we as Native people are successful. We do have things to offer to the world.”

Are we asking for too much if we wish that someday Marky Cielo, Paulo Avelino, and other Igorots in the movie/tv industry will also say these things? In fairness, Marky did change stereotypes when he proudly acknowledged his origins.

RE-INFORCING STUPID STEREOTYPES. Splasher has a scathing review of GMA-7’s Asian Treasures. Read it here. Aba, this GMA people talaga. Meron pa silang undocumented Cordillera tribes with a princess daw. In the early days of this blog we ranted about a woman labeled as an Igorot princess here and here. [Source: Splasher]

FANTASIES IN A G-STRING. This woman has sexual fantasies about Igorots in a g-string. Okay, maybe I am being nasty but if she is going to commoditize or fetishize the Igorot image then she should not complain if we make fun of her. If she finds her Igorot-style model, I’m sure she will say, “Spank me, Igorot lover boy, spank me . Oooh, let me smell your g-string.” Sandati has the details on how you can model (and maybe more) for this woman. [Source: Sandati]

CITY MAYORS DON’T WANT TABUK TO BECOME A CITY. Well, I was kind of neutral about this Tabuk cityhood thing because I am not from Tabuk, but I’m now all for approving it just to spite this group of whining entitled city mayors who do not want Tabuk to become a city. Why are they against Tabuk cityhood? It’s all about the money, baby! They want to keep the revenue allotment to themselves. [Source: Manila Times]

BAGUIO TEACHER WINS MOST INNOVATIVE AWARD. And he goes to Cambodia to attend a conference. Warren Ambat of the Baguio City National High School won the “Most Innovative Teacher” award along with two others. The award is given by Microsoft to “public high school teachers who have successfully integrated Information and Communications Technology (ICT) into their classroom teaching and learning”. Ambat and his co-winners will fly to Cambodia on February 28 to represent the country in the annual Asian Regional Innovative Teachers’ Conference. [Source: Sunstar]

ABRA’S BLOOD POLITICS: The Philippine Center for Investigative Journalism has a sobering story on Abra’s dangerous political climate written by someone who belongs to a political warlord clan so she obviously knows what she is talking about. Choice quote: “A typical day in Abra comprises heavy doses of gossip, intrigue, dog-eat-dog stories, politicking — and a 70-percent possibility of hearing about another killing, usually that of someone in politics. Many have called Abra the ‘murder capital of the north,’ and I agree; since 2001, there have been at least 30 political figures, major and minor, killed in the province.” Read the whole story here. [Source: PCIJ]

OUR LONG LOST TWIN. Although we can’t really say whether Adam Beach is our long lost cousin, (The ancestors of Native Americans/Canadians reportedly walked from Asia to the Americas which were then connected by ice.) I am pretty sure that this woman is my long lost twin. Hi sister, Fair Lady! Thanks to Splasher for the clue.