Our kailiyan Art Tibaldo was kind enough to share with us his article and his photos of the recently concluded Lang-ay Festival in Bontoc, Mt. Province. You can see more of Art’s beautiful Cordillera photos in his website. Thanks Art.

Lang-ay in Bontoc: A Growing Tradition
By Art Tibaldo
The vernacular hooray “Gawis ay Mountain Province” was repeatedly heard as gongs echoed incessantly in this Philippine upland province’s 2007 Lang-ay Festival. First launched three years ago to celebrate the province’s founding anniversary, “Lang-ay” which means to share happiness, promote family solidarity, hospitality, and nurture friendship with a toast of home-brewed wine has become a major local event. Visiting expatriates, tourists, neighboring townfolks and covering journalists were once again treated to a cultural bonanza as residents of Mountain Province showed off not only their unique culture but also their warm hospitality.

Now becoming a regular event of this province, the Lang-ay fest has become a good opportunity for uprooted locals who are now working and residing abroad to come home and revisit their native home. Dr. Albert Bacdayan, the festival guest of honor and keynote speaker likened Mountain Province to that of Ithaca of the Greek Epic Iliad and referred to the Igorots abroad as Odysseus wanting to return home after the Trojan War. An internationally acclaimed university professor who is also a founding member of the Igorot Global Organization, Bacdayan praised the organizers and the people of Mountain Province for continuing the spirit of he calls Igorotism.

The weeklong festival that started drawing visitors and tourists before the lent included an agro-industrial trade fair at the capital town’s center participated by the various municipalities. The locals showcased their farm produce as well as their crafts that are being supported by the government’s One-Town-One-Product or OTOP. Local drinks and beverages like the Lang-ay wine made from fermented wild berries, rice snacks such as the “Patupat” and “Linnapit” and the upland favorite “Pinikpikan” (beaten and roasted chicken) were the perfect mix of food during the festival. The aromatic Arabica coffee served with molasse or muscovado was a good in-betweener to locals and tourists alike.

Garbed in his native attire, incumbent Governor Maximo Dalog, expressed optimism as he rallied his constituents to continue the once a year event that they have started. The governor explained to visitors that “Gawis” means a wealth or a blessing that is meant to be shared for everybody to partake.

Despite the absence of celebrities like in last year’s presence of an emerging TV star by the name of Marky Cielo, this Lang-ay had political figures like senatorial bet Chavit Singson and his stalwart counsel Pablito Sanidad. Expats from overseas like Edwin and Mia Abeya of the Igorot Global Organization, Hugo and Grace Prill of BIBAK Hawaii and other Balikbayans graced the occasion. Among the chosen jurors to select the best cultural performers is the internationally acclaimed independent filmmaker Kidlat Tahimik. Awarded as among the outstanding citizens of the province is former Energy Undersecretary Rufino Bumas-ang who was also given recognition as a council of elder with the “Suklong” or native headgear given him by the organizers. 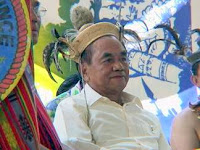 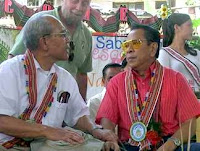 Although travel from Baguio to Mountain Province this time was noticeably easier than several years back, the need to improve accessibility and interconnectivity between nearby places needs to be improved. This was an issue thoroughly discussed by the Regional Development Council (RDC) chaired by Dalog during a meeting in Bontoc. Same concern was also raised by Governor Singson during his short talk at the Lang-ay program saying that the Ilocos Region shouldn’t be hard to reach if only the access road from Halsema Road to Cervantes be improved.

With the hosting of the 7th Igorot International Consultations by the RP Delegates in April next year in Banaue Ifugao, local members of the Igorot Global Community (IGO), the mother organization of Igorots worldwide are hopeful that both events will spur up growth and development in this upland region.

Photo Captions (From top to bottom)
A typical scene at the Dap-ay: This Sagada contingent shows a young boy doing kolkolis or foot massage, a regular chore at the dap-ay in the olden days.

Proud Igorot: Former Energy Undersecretary Rufino Bumas-ang can now touch base in his native home after years of helping the government improve its energy resources. Bumas-ang is Mountain Province Awardee as Outstanding Citizen.

UPDATE: Joel Fagsao has reports about the Lang-ay Festival here and here.