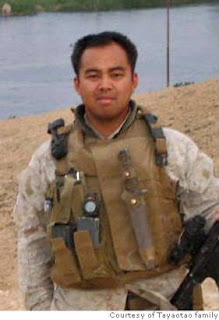 Sgt. Michael Tayaotao may be the first Igorot soldier to die while serving his country in Iraq. Our condolences to his family.

We hope to give you more details as we get them. [Edited: Link to article removed]. Photo at right is courtesy of the Tayaotao family via SFGate.com.

UPDATE 10: From Trublue in the comments:
Here’s a more updated info on Michael’s last journey in Poway, California.

As per BIBAKNets info, the final mass for Michael is still the same.

UPDATE 9: Forwarded from Bibaknets:
Here is the latest on Michael Tayaotao as of August 16, 2007. Next Thursday (August 23), viewing and vigil will be at St. Bartholomew’s Episcopal Church in Poway, 16275 Pomerado Road. Time not yet available.

On Friday (August 24), there will be an 11AM mass at the same address above. Following, will be the burial at the Dearborn Memorial Cemetery in Poway where Michael’s brother Vincent was laid to rest last November 2006. Word on the reception following the burial will be announced soon, as we go along supporting the Tayaotaos on their dark journey.

UPDATE 8: From Trublue via the comments:
To Michael’s acquaintances who have made flight reservations or who planned on driving to San Diego, California this weekend. It’s not going to happen regrettably. His remains will be flown to Sunnyvale, California on Friday (Sat Baguio time). After two or three days, he will be flown down south to Poway, California.

Exact dates of viewing and final honors/services hasn’t been set yet. Will keep you updated or send email to John Tanacio at John.sclc@gmail.com for more on time developments. Thanks.

From SFGate.com: Leah Tayaotao on her brother:

“Michael was an optimist and a compassionate and courageous individual,” Leah Tayaotao said. “He once said, ‘I look forward to what life has to offer.’It is Michael’s infectious laugh that everyone most admires. I am absolutely fortunate to have had a brother who has guided me through life’s challenges and reach for my dreams.”

“Sergeant Michael Tayaotao’s courage is an example of the extraordinary commitment that is displayed every day by our nation’s service members. Each time we lose a member of our armed forces, we are painfully reminded of the cost of freedom and democracy. Maria and I extend our condolences and prayers to Michael’s family and friends and honor his service in defense of our country.”

In honor of Sgt. Tayaotao, the governor announced capitol flags would be flown at half-staff. More at MSNBC.

UPDATE 5:Felix Tayaotao on his nephew, Michael: “He’s a great man, that’s all I can say. He’s a straightforward and brave man. He did what he can for his country, for his people.” More at SFGate.com.

UPDATE 4: Messages of sympathy to Michael’s family here and here.

The Department of Defense announced today the death of a Marine who was supporting Operation Iraqi Freedom.

UPDATE 2. From Trublue via the comments:
Michael is only 27 years old. His younger brother Vincent died last October 2006 while attending University of California/Irvine as a senior. My close source had spoken to Heidi (Michael’s mom), and intimated that Michael’s wish when he dies, is to be buried next to his younger brother in Poway, California. Traditionally he was supposed to be interred in a military cemetery but he signed a waiver prior to going to Iraq on a second tour.

He was supposed to go home next month, since his enlistment is up and resume his interrupted studies. Now, his life, dreams was cut short by those ever dangerous IED’s (Improvised Explosive Devices).

His dad Mario is in Baguio/La Trinidad area and US Embassy personnel were able to contact him. His mom is in China Lake, California which is northeast of Los Angeles.

Heidi is from Kapangan and Mario from La Trinidad, but both grew up in Baguio/La Trinidad area.

UPDATE: As Trublue stated in the comments, Michael is a member of the U.S. Marines which he joined immediately after high school. He is the son of Heidi and Mario Tayaotao.

His remains will be flown to (or may already be in) Maryland and will be transported to San Diego, CA on Tuesday, 14 August. [Info forwarded from Bibaknets]

SOMEWHAT RELATED: For Those Who Served and Died.