Who is Rey Tam? To answer that question, let us devote a whole blog entry of The List in his honor. Rey Tam is an Igorot boxer who was once ranked No. 1 in the superfeatherweight division by the World Boxing Council (WBC). I never heard of him until I came across his name in the website philboxing.com. His story is fascinating and the article about him by Quinito Henson is beautifully written. In true internet style, I copied the article and pasted it here for all of us. I hope that his story will inspire other Igorots to take up boxing and, in honor of Rey Tam, win a world title.

In 1978, Rey Tam was on top of the world–almost. He was ranked No. 1 by the World Boxing Council (WBC) in the superfeatherweight division and brandished an unbeaten streak of 23 fights when matched against defending champion Alexis Arguello of Nicaragua in a title fight at the Great Western Forum in Inglewood, California.
Tam, a native of La Trinidad, was tough as nails, hardened by a life of poverty in the mountains of Benguet. He turned pro in 1974 under manager Albert Della and quickly built a reputation as a hard-hitting knockout artist, disposing of his first four opponents inside the distance.
With a string of impressive wins, Tam earned a crack at the Philippine superfeatherweight crown held by Al Espinosa in 1977 and promptly ascended the throne via a 12-round decision. He would later describe Espinosa as the most formidable opponent he ever faced. A few months later, Tam outpointed Apollo Yoshio to capture the Oriental 130-pound diadem. He went on to stop Hae Eun Chung in a fight that set up his crack at Arguello’s title.
Tam had difficulty obtaining clearance from the Philippine government to travel because of martial law and it took international matchmaker Lope Sarreal, Sr. to wage a media campaign that put pressure on authorities to allow his travel. But the delay cut into Tam’s acclimatization for his first US trip and he arrived only a day before the bout.
Despite jet lag, Tam was determined to show up Arguello. But as the fight wore on, he grew increasingly tired and was exasperated by referee Rudy Jordan’s tactics. Jordan repeatedly broke up the fighters as Tam pushed Arguello against the ropes and into the corners to take away the Nicaraguan’s reach advantage. Jordan also tolerated Arguello’s nifty tricks like holding down Tam’s left arm in close exchanges and using his forearm to ward off the Filipino.
Tam said Arguello never hurt him. But at 1:54 of the fifth round, Tam turned to Jordan, cursed him and walked back to his corner in surrender.
Although Arguello achieved legendary status, Tam wasn’t impressed and said he fought Filipinos who were stronger and more skillful, like Espinosa.
According to Tam, Arguello quietly went to La Trinidad several years after their fight and looked for him as if his conscience bothered him. 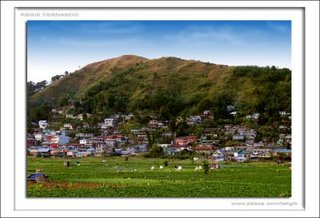 Unfortunately, I can’t find a picture of Rey Tam. So let’s make do with a picture of his hometown, La Trinidad, Benguet 🙂 Photo courtesy of Regie Fernando in this site.

“I think Arguello realized I didn’t really lose to him, that it was the referee who forced me to quit,” said Tam in Filipino. “So he went all the way to my town. We didn’t see each other but he left something for me to remember him by. Maybe, it was his way of expressing remorse.”
Arguello met up with Tam’s brother and asked him to give a framed memento to the fighter.
After losing to Arguello, Tam’s career went on a tailspin. He lost his next four fights, including a fourth round knockout loss to future world titlist Rolando Navarrete in a bout that he took on an eight-day notice because he needed the money to pay for a relative’s hospitalization. During the skid, Tam also lost his Oriental title to Moon Suk Choi on a ninth round stoppage in Pusan.
But Tam got back on track and rattled off eight straight wins before losing a disputed split 12-round decision to Ryu Fukida in an Oriental title bout in Tokyo in 1980. Filipino judge Godofredo Fandialan saw it 117-115 for Tam. Japanese judge Ken Morita had it 117-114 for Fukida. And American judge Paul Field scored it 117-116 for the Japanese. Then came two knockout setbacks to Choi Chung Il and Dom Somsakdisith before he won six successive outings, including a decision over highly-regarded Rod Sequinan.
In 1982, Tam was halted by Flash Villamer in a Philippine lightweight championship fight in Baguio City and it turned out to be his last-ever outing. He wound up with a record of 36-9-1, with 14 KOs. Tam was diagnosed to be suffering from a cataract condition in the right eye and underwent surgery in 1984. Renowned ophthalmologist Dr. Reynaldo Paraan performed the operation and ordered Tam to lay off alcohol for a year.
Tam, however, couldn’t turn his back on the bottle. A confirmed alcoholic, he was back to gulping down liquor four months after the surgery. Tam’s uncaring attitude led to an infection and left him blind in the right eye.
Now 55, Tam ekes out a living as a boxing trainer at the Beatrice Emporium in downtown La Trinidad and manages a stable of local fighters, including promising super bantamweight Roderick Wakit and his three sons Allan, 24, Alvin, 23, and Aldrin, 22. He also grows potatoes in a small vegetable patch near his home. Tam didn’t save a centavo from his ring earnings. He hasn’t drunk liquor in over 15 years.
Tam met his wife Grace, an attendant in the Baguio canteen where he used to hang out, in 1979. Their oldest child Heidi is now 26. None of their four children finished high school. The three boys are aspiring pros, inspired by their father’s ring exploits.
Even as they’re not wealthy, the Tams are blessed with a happy family life and fond memories of the past. When Allan fought in La Trinidad recently, his parents, brothers and sister were all at ringside cheering themselves hoarse.
Tam said life could’ve been better but he’s not complaining. The one-eyed former fighter missed out on a world championship but hopes one of his sons will someday live the dream that he failed to turn into reality.

Not a few readers phoned to ask more about legendary Benguet fistic hero Rey Tam’s fight against Alexis Arguello for the World Boxing Council superfeatherweight title in Los Angeles in 1978. Tam’s life story was published in this section last Monday.

In the first round, Arguello opened a cut over Tam’s right eye but it didn’t seem to bother the tough challenger who was clearly the aggressor. Tam never took a step back as he took the fight to the Nicaraguan.
Arguello, taller by three inches, kept Tam at bay with sharp jabs and counterpunched his way to an early lead. Tam, however, was relentless in his attack. It didn’t matter that Arguello repeatedly peppered him with rapier-like jabs. Tam just wouldn’t back down.
Early in the fifth round, Arguello landed a short right that shook up Tam. Sensing the challenger was hurt, Arguello charged in and threw a series of unanswered blows. Tam appeared wobbly but was not close to hitting the deck. Referee Rudy Jordan then stepped in to stop the contest at the 1:54 mark.
According to Tam, he was more frustrated by Jordan than Arguello. He claimed the referee broke up the fighters whenever Arguello was in trouble. When Jordan stopped the fight, Tam said he turned to the referee, shouted ‘bullsh*t’ and walked back to his corner.
But in a Ring Magazine account of the fight, Tam blamed cramps for his defeat. The report said he felt stiffness in his right leg starting the third round.
Arguello confessed it wasn’t easy repulsing Tam. “It’s difficult for me to fight a southpaw and it took three or four rounds for me to figure him out,” said Arguello. “I’m really a better fighter when I’m working inside but I had to work him at long range. He was a good challenger. He kept coming at me. I think I really hurt him first with a shot to the head in the second round.”
It was Arguello’s first defense of the 130-pound title he wrested from Alfredo Escalera three months earlier. He would later defend the throne against another Filipino, Rolando Navarrete.
Tam said several years after their fight, Arguello quietly flew to the Philippines and sought him out. He said Arguello made his way to Benguet but they never met. Instead, Arguello saw Tam’s brother and gave a framed memento to remember him by. Tam said the Nicaraguan must have felt guilty about the way the Filipino lost their bout.
Tam retired from the ring in 1982. He is now blind in the right eye, a condition triggered by a cataract and aggravated by a drinking problem.
oOo
My notes: Should we blame Marcos and his martial law regime for Rey Tam’s loss? Ha ha. I know Marcos is often blamed — fairly and unfairly — for the mess that the Philippines can’t seem to get out off, but I can’t help wondering what could have happened if Rey Tam was allowed by the martial law authorities to leave the country early so he can prepare for his bout. He could have acclimatized and been better conditioned. He could have gotten a good night’s sleep and not allowed the referee — no matter how biased — to piss him off. Finally, he could have won. It’s one of those “What ifs?”

Here’s a question worth pondering. Could Manny Pacquiao win his bouts in the United States if, like Rey Tam, he only gets there a day before the fight? Manny is a great athlete, but I seriously doubt it.

Anyway, there’s a discussion about Rey Tam in this site.