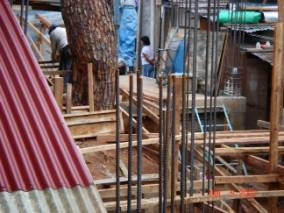 The Nashman is mad for a good reason. Eh paano ba naman itong kanyang beloved alma mater is going to entomb a tree which is very much alive.

Someone should remind the Reverend Fathers that “a tree looks at God all day, and lifts her leafy arms to pray”. So they will prevent the tree from praying to God if they are going to entomb it. Ayyayay. More details on this bizarre story here.

Read moreKilling Me Softly With Concrete

Our good friends Pagano and Gandang Igorota wrote very interesting comments to our earlier posts on bird banding and bird catching so I decided to publish their comments here so that those who do not read the comments section will not miss the wit of our commenters and the information they add to this topic.

Aha. We have another letter dealing with the same subject as our previous post. This second letter was written by a Peace Corps volunteer who was once based in Sagada.

The letter goes into details about the iSagada practice of bird catching or “ikik”. Back to the days when I was based in Sagada, I joined people (mga four or five times lang yata) who were going to Mt. Ampakaw to catch these migratory birds. It is exciting at first but it gets tiring because you have to climb this mountain at night and you have to do it during the cold months of the year. If I’m not mistaken this practice is now officially banned by the local government mainly because of the SARS/bird flu scare a few years back and also for environmental purposes. I’m not sure if the ban is effective.

Read moreBird Banding and Bird Catching: Another Letter From the Boondocks

Here’s an interesting letter written in 1974 by a kailiyan from Nueva Vizcaya. It deals with a migratory bird which he saw hanging on a tree; he sent this letter to the organization which was banding birds probably to study their migratory patterns. Hindi kaya kilala ni Gandang Igorota ang ating letter writer?

Read moreBird Banding and Bird Catching: A Letter From the Boondocks