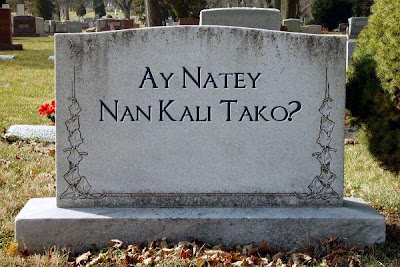 Our posts on languages generated several thoughtful comments so I decided to upload two of them here for those of you who don’t visit the comments section. [Aha, you are missing 2/3s of your life if you don’t read the comments in this blog hehe.] The first comment is from an anonymous commenter (Hi Anonymous!) and the second one is from Layad who, incidentally, has a blog that you should visit. Thanks you two!

Anonymous says:
Languages do come and go. When a language dies so does a memory of a culture, a way of life.

I am of the opinion that an equalizing asset in this global economy will be ideas and concepts that are discoverable only via high proficiency of our languages and intimate knowledge of our world views, cultures, and ethnic heritage.

I believe that valuable ideas and concepts are now extinct because they are buried alongside ancestral chants,stories,and practices that can no longer be passed on in their original languages.

Hope it does not sound Greek or Chinese to anyone? 😉

Layad Daphne says:
Yes, it does matter when a languages dies, especially if it is your own! I remember the comment of the last speaker of a certain language, (I forgot the name of the language and this last speaker died recently as well), who said that it is no fun to be the only speaker of a language, because the only people you ever talk to are linguists and they are no fun. Ha!

As for Domogan’s bill, it does not quite match what I think is best although it is capturing another aspect, which is that non-Cordillerans learn from our culture and maybe we learning from it as well. But when it comes to language vitality, I believe that using the local languages in the education system especially in the early stages is the better option, as most researches would back up.

But I think there are strong oppositions towards this kind of system, because of misinformation. Many people think that using local languages in teaching would hinder children from learning English properly, that it would make the children ignorant or dumb, etc.

That is why I applaud SIL and other NGOs for piloting First Language Components in the Philippines. They have one in Butbut, Kalinga. And mind you, the results are very encouraging!

*****
Incidentally FerriCardia has been blogging about the language issue long before we started doing it here. I think the following articles which you can find at her blog blog are must reads: On Language Maintenance, Shift and Death; Minority Language Education; On Language Development and Revitalization; and On Language Dilution.

RELATED POSTS: Are Our Languages Dying; Domogan: Teach Love in Many Languages.

2 thoughts on “Your Thoughts on the Importance of Local Languages”