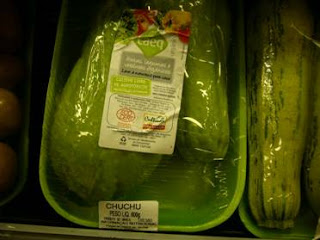 The Nashman shares with us a picture of a pack of sayote which he shot in Brazil where sayote is known as chu-chu. You should visit The Nashman’s delightful Brazilian adventures here, here, and here.

Now if you, like us, are the “slice and dump the sayote in a boiling water” kind of cook and want to improve your cooking skills, you might want to try the recipe for ensalada chuchu which we are putting below. Yes, it’s a Brazilian recipe and we copied it from Bonnie Hamre.

Hah! If you thought this is not a blog where you can find recipes, you should think again. We are going to give In Our Kitchen a friendly competition!

PREPARATION:
Boil the chayote or cucumbers for 10 minutes, no more. Drain, place in a bowl, then dress with salt, pepper, garlic, onion, parsley, oil and vinegar. Mix well and refrigerate before serving.