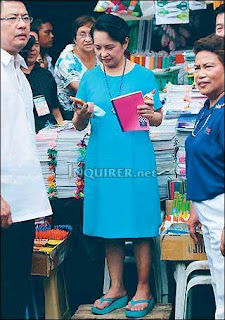 Tomorrow, Gloria a.k.a. Gollum will be delivering her State of the Nation Address (SONA). Of course we are interested in what she is going to say. We’re particularly interested kung ano ang sasabihin niya tungkol sa Cordillera.

In the meantime, let’s review Gloria’s SONA last year where she said the following:

GLORIA: My father built the Halsema Highway from Baguio to Bontoc, and the Bagabag airport in Nueva Vizcaya to access the Ifugao rice terraces, which by the way, the UNESCO has recently praised for the way we have carried out our heritage preservation policy. We have rehabilitated the Baguio to Mount Data leg of the highway and the rest of Halsema will now follow. We will upgrade the Bagabag airport and build a new one in Lallo, Cagayan, which will connect to Cordillera by upgrading the Tabuk-Tuguegarao Road.

OUR COMMENT: Di na nahiya si Gloria. We were so incensed by this woman’s credit grabbing and the shameless rah-rah-rahs of Cordillera politicians so we decided to start this blog. You might want to visit our very first post here where we stated that Gloria’s dad is no Halsema builder. Also, if anyone deserves credit for the Ifugao terraces conservation, it should be the people of Ifugao and not Gloria’s heritage preservation policy dahil wala naman talaga siyang policy.

OUR COMMENT: And this is where she shamelessly pointed at our poor kailiyans as if they are exhibits in a zoo. More shockingly, our equally shameless Cordillera politicians, led by their cheerleader Morris, kept clapping their hands and going rah rah rah while the cameras zoomed in to our kailiyans’ bare feet kasi they are too poor daw to afford Spartan.

OUR COMMENT: Farmers are not really using these refrigerated facilities na ipinagmamalaki ni Gloria. Last we heard the usage rate for this cold chain is only 37%. So there must be a serious reason why farmers are not using it.

Now, if you are a farmer, would you bring your produce to a cold chain (where you have to pay pay rental fees) simply to wait for better prices which may or may not come?

Personally, we think this cold chain thing is a very silly solution to the problems of farmers (which is the legal and illegal importation of vegetables). Government officials are tempted to build cold chains because they have something to show off to visitors and say, “Look, we are high tech.”

GLORIA: So that the people will know how well their money is spent, Benguet and its towns of Bakun, Bokod and Itogon have rolled out the new electronic government accounting system in their jurisdictions.

If Ifugao was able to cut its poverty in half in the first three years of our administration, from 56 to 28%, congratulations. We hope that through these programs, the other provinces can replicate the success of Ifugao.

OUR COMMENT: Do anyone of you think, as we do, that there is something wrong with the poverty figures being cited for Ifugao. We don’t think the poverty figure for Ifugao was really 56% to begin with. It is an impossibly high figure and to think that hindi naman nagkakalayo ang poverty situation ng mga probinsiya ng Cordillera.

But if we are wrong and that there was indeed a huge material reduction in poverty in Ifugao (from 56% to 28%) in a very short span of time (three years), then maybe we should all learn the secret on how it was done so we can reduce poverty, not only in the Cordilleras, but the entire country.

OUR COMMENT: Now, if you ever wondered why Morris is GMA’s rah rah boy in the Cordilleras, the above paragraph would answer your questions. (We found her words patronizing but that’s just us.)

She caresses his ego by praising him in public. So Morris, an accomplished attorney no doubt, becomes the poster boy of a cheating President. He, in turn, becomes her lackey. Buti sana kung mabigyan siya ng isang committee chairmanship sa Congress (and not that indigenous committee chair because that’s not competitive at all) para naman may bayad ang kanyang pagiging lackey other than cheap public praise.

[*Note: The “lastog” in the title of this post means “liar” in Ilokano and “arrogant” in Kankanaey; both meanings apply in this case.]