It’s exactly two weeks before voters go to the polls so let’s do an election roundup.

As we said, we doubt if the internet has any impact on the elections but it is a good way for candidates to publicize their platforms to the electorate.

In case you still don’t know anything about your candidates, the ever reliable Northern Dispatch has interviews with Baguio’s mayoralty bets: Peter Rey Bautista, Virgilio Bautista, Guillermo Hernandez, Elmo Nevada, Leandro Yangot Jr., and Braulio Yaranon. However, if you would rather read what people say about the candidates, then you might want to visit Sunsets in January which has an entry on Baguio candidates here.

Incidentally, here are some posters of two Baguio candidates defaced by the stickers of other candidates [Source: Jack Cariño’s site]. It’s unfortunate that these things happen. If I am a Baguio voter, I will not vote for the candidates whose stickers were used to deface the posters. I know this might only be the handiwork of some overzealous supporters but the candidates should be able to police their own people. 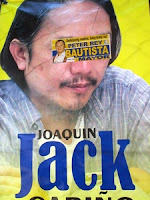 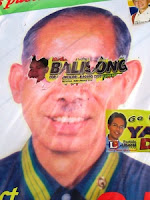 Meanwhile, in other parts of the region, Donato Legaspi, a mayoralty candidate in Kabugao, Apayao faces disqualification because he is allegedly not a registered voter in said town. The disqualification case against Legaspi was filed by incumbent mayor Reynald Talimbatog who will run unopposed in case he is able to prove his allegations against his opponent.

In Abra, at least two election related violence have been reported. Langiden mayoralty candidate Boyet Castillo survived an ambush on 23 April. But Eddie Tadeo, a a village chief in Bucay, Abra and a supporter of gubernatorial bet Estaquio Bersamin was not as fortunate as he was killed last 26 April in front of the Bangued Cathedral. Earlier, the Commission on Elections (COMELEC) imposed a total gun ban in Abra but this does not appear to have stemmed the violence.

In Kalinga, for those of you who have not visited our Updates on the Diasen Case, we reported there that Floydelia Diasen, wife of slain gubernatorial bet Rommel Diasen, filed her candidacy for Governor as a substitute for her husband but it is not clear whether she can do so allegedly because she didn’t file on time and that her husband was running as an independent candidate.

Meanwhile, the Kalinga Provincial Board issued a resolution which “strongly condemned the dastardly assassination of Hon. Rommel W. Diasen” and recommended that his son, Mark Aldrich Diasen, be appointed to the board to replace Board Member Sergio Angganay who assumed the vice gubernatorial post.

In the meantime, local candidates in the towns of Lubuagan, Tanudan, Pinukpuk, Balbalan, and Tinglayan forged peace covenants to work for and observe an honest, orderly, credible, and peaceful elections.

In Ifugao, the COMELEC, the Philippine Information Agency, and the Philippine National Police conducted a candidate’s forum for those who are running for provincial positions. Incumbent officials reportedly didn’t attend the forum giving rise to suspicions that they “deliberately excluded themselves to evade responding to burning issues pertaining to unfulfilled promises”. The following non-incumbent candidates were present: Congressional bet Dr. Wesley Dulawan, candidate for Governor Teddy Baguilat Jr., Board Members Pedro Mayam-o and Nora Dinamling who are slugging it out for the Vice Gubernatorial seat and candidates for Board Members Robert Humiwat, Donato Ananayo Jr. and Peter Bumidang Jr.

All is quiet in Benguet and Mt. Province so we assume that politicians there are campaigning in their own merry way.

RELATED POSTS: Cordillera Election Roundup; Your Congressman: Who’s the Richest of Them All; Are Your Politicians Too Powerful For Your Own Good; PHOTO CREDIT: Jack Carino’s Multiply Site.