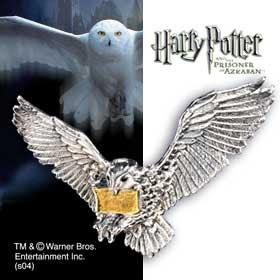 SURE HEDWIG CAN CARRY MAIL
BUT CAN HE HARVEST RICE?

Its been sometime since we posted a Cordillera folktale. This being the new year, its about the right time to post a new one. This tale is about a flock of birds who help a man gather his harvest. Eat your heart out J.K. Rowling, your owls in the magical world of Harry Potter can only carry mail while the tikgis in the highlands of Abra can harvest rice and make them grow faster too.

You can read more magical (?) Tingguian stories from the Project Gutenberg website which has a collection of such stories compiled in 1916 by Mabel (Cole) Cook.

Ligi had gone to the field to look at his growing rice, but when he heard this sound he looked up and was surprised to see some birds circling above and calling to him. “Why, you cannot cut rice,” said Ligi. “You are birds and know only how to fly.” But the birds insisted that they knew how to cut rice; so finally he told them to come again when the grain was ripe, and they flew away.

No sooner had the birds gone than Ligi was filled with a great desire to see them again. As he went home he wished over and over that his rice were ready to cut. As soon as Ligi left the field the tikgi birds began using magic so that the rice grew rapidly, and five days later when he returned he found the birds there ready to cut the ripened grain. Ligi showed them where to begin cutting, and then he left them.

When he was out of sight, the tikgi said to the rice cutters: “Rice cutters, you cut the rice alone.” And to the bands which were lying nearby they said: “Bands, you tie into bundles the rice which the cutters cut.” And the rice cutters and the bands worked alone, doing as they were told.

When Ligi went again to the field in the afternoon, the tikgi said: “Come, Ligi, and see what we have done, for we want to go home now.” Ligi was amazed, for he saw five hundred bundles of rice cut. And he said: “Oh, Tikgi, take all the rice you wish in payment, for I am very grateful to you.” 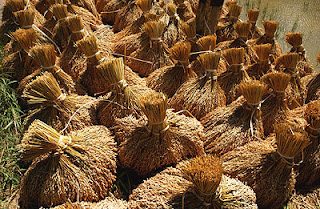 THE BUNDLES OF RICE THAT THE TIKGI BIRDS
HARVESTED MUST HAVE LOOKED LIKE THIS.

Then the tikgi each took one head of rice, saying it was all they could carry, and they flew away. The next morning when Ligi reached the field, he found the birds already there and he said: “Now, Tikgi, cut the rice as fast as you can, for when it is finished I will make a ceremony for the spirits, and you must come.”

“Yes,” replied the tikgi, “and now we shall begin the work, but you do not need to stay here.”

So Ligi went home and built a rice granary to hold his grain, and when he returned to the field the rice was all cut. Then the tikgi said: “We have cut all your rice, Ligi, so give us our pay, and when you go home the rice will all be in your granary.”

Ligi wondered at this, and when he reached home and saw that his granary was full of rice, he doubted if the tikgi could be real birds.

Not long after this Ligi invited all his relatives from the different towns to help him make the ceremony for the spirits. As soon as the people arrived, the tikgi came also; and they flew over the people’s heads and made them drink basi until they were drunk. Then they said to Ligi: “We are going home now; it is not good for us to stay here, for we cannot sit among the people.”

When they started home Ligi followed them until they came to the bana-asi tree, and here he saw them take off their feathers and put them in the rice granary. Then suddenly they became one beautiful maiden.”

Are you not the tikgi who came to cut my rice?” asked Ligi. “You look to me like a beautiful maiden.””Yes,” she replied; “I became tikgi and cut rice for you, for otherwise you would not have found me.” Ligi took her back to his house where the people were making the ceremony, and as soon as they saw her they began chewing the magic betel-nuts to find who she might be.

The quid of Ebang and her husband and that of the tikgi went together, so they knew that she was their daughter who had disappeared from their house one day long ago while they were in the fields. In answer to their many questions, she told them that she had been in the bana-asi tree, where Kabunian had carried her, until the day that she changed herself into the tikgi birds and went to the field of Ligi.

Ligi was very fond of the beautiful girl and he asked her parents if he might marry her. They were very willing and decided on a price he should pay. After the wedding all the people remained at his house, feasting and dancing for three months.